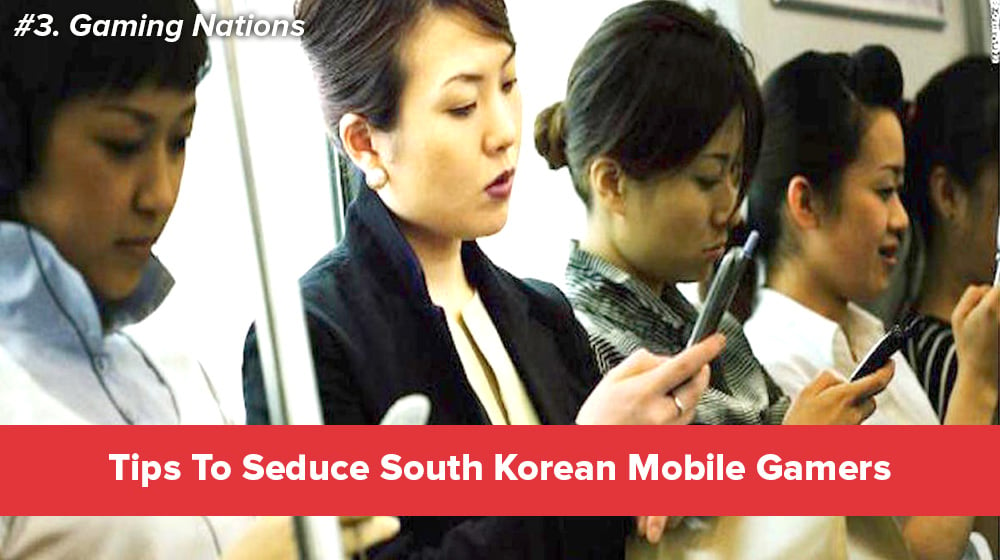 China? Of course! Done and dusted.

Are you indolent with indecision as to which game market should figure next on your radar for game monetization purposes? Try South Korea.

Why? Because, after China, U.S., and Japan, it’s the South Korean game market where things are really hotting up, both in terms of game downloads and revenues. In fact, according to industry sources, the mobile app market here has grown by 795% since 2013. 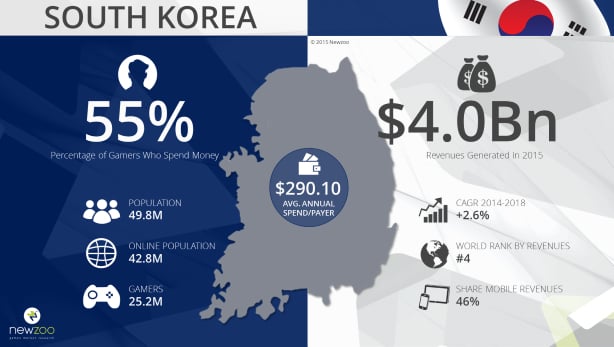 And, seriously, what caught our attention is the fact that, it’s not just the local players who are firing all cylinders, even non-Korean developers are having their best times under the sun.

Yep!  Gone are the days, when Korean market was the preserve of local players. Today, even foreign developers are diggin’ in their heels backed by some awesome localization strategies. By making their texts and images Korea-friendly, foreign developers are making a dent in this country’s enormously growing gaming landscape big time.

Of course, the online landscape is flooded with all sorts of digital data, appreciating the significant growth of the Asian mobile game market.  But then, the fact of the matter is, game monetization is still at its nascent stage here.

Regardless, the South Korean game market is doing great from revenues and downloads standpoint. In fact, we wouldn’t have ever believed in this country’s gaming potential, given its minuscule size, but for its revenue, which stood at $4.0Bn in the year 2015. In fact, the revenue is far better than other developed nations like France, Australia, United Kingdom, and Germany who are drawing well below $4 billion. This makes South Korea the 4th largest game market in the world. 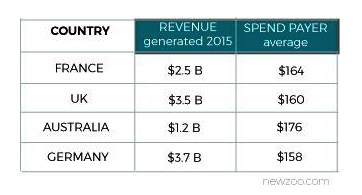 Today, there are 25 million gamers in South Korea, of which 14 million spend on games. According to Localizedirect, the Korean gamers are considered the second highest spenders in the world with an average spending of $290 per year  And, it’s also been estimated that the total revenues will grow annually by 2.6% Children and professionals spent their time in subway cars not reading books, but on gaming and chatting with friends on KakaoTalk.  The Korean subway cars have LTE speeds pegged at up to 150 megabits per second — nearly triple that of speeds in the US An average Korean gamer has over 40 installed apps of which 3 are paid. While men are more into MMORPG or RPG adventure games, women aside from playing RPG, also play Puzzle, Web Board Games, and Casual Games.

Korean gamers prefer to play free games, but freemium is the model that bodes well with them. All in all, nearly 90% of the revenue is derived from freemium games.

New Update: If we consider the Top 10 Grossing mobile game apps in South Korea, RPG is still the reigning champ: of the 10 mobile game apps, 5 are of RPG nature. Even if look at the top 100 game apps, both in Android and iOS, the equation doesn’t really change. RPG leads all the way.  In the case of Android, almost 40% of users play RPG games and the same goes for iOS as well, with 43% users. 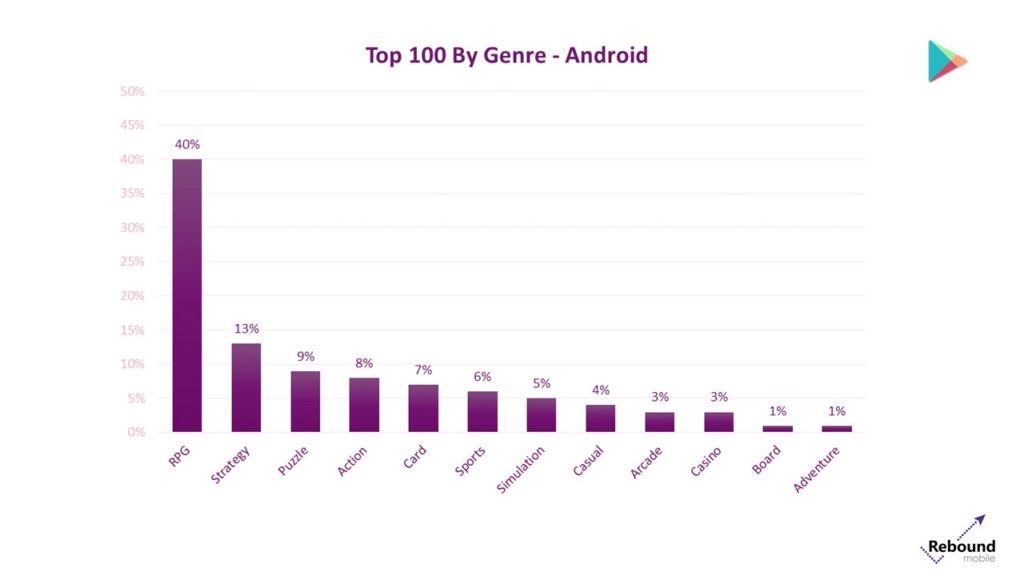 When the U.S. and some European nations prioritize individual performances and rewards as their go-to strategy for game monetization, the Korean and other Asian markets rely on social networking. In short, working in a group is accorded paramount importance here.

Suffice it to say, games that bring in a good number of players on board or invites other players to join the game do good business as opposed to those games that fail to factor in the social element.

So, ensure that you’re in-app purchase allows you to communicate with others if high ROI is high on your cards.

MMORPG or Massively Multiplayer Online Role-playing Games are ruling the hearts and the minds of South Koreans. This game genre has got high download statistics and a great ARPU  that roughly stands at US $ 5.27 as opposed to other app categories. 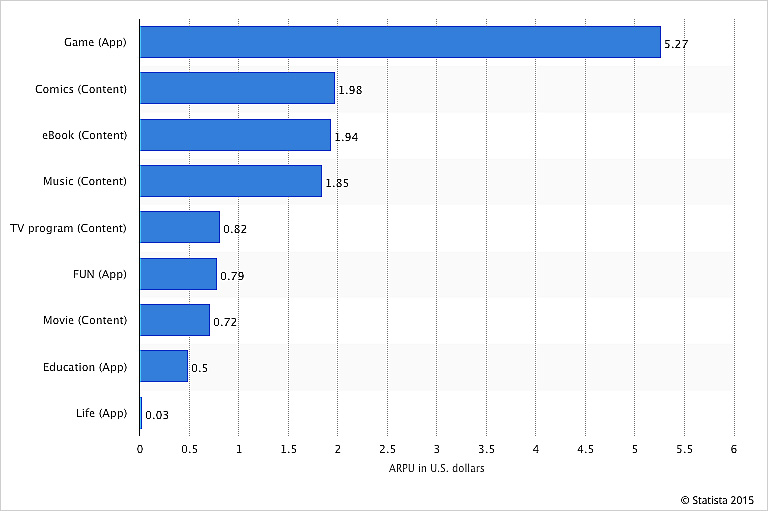 So, if Korea is on your mind, then MMORPG should be high on your game app development agenda.

That’s not to say, you shouldn’t try developing non-RPG games. Because, even non-RPG games backed by IP strategy, optimized gameplay, and timely marketing are breaking into the top slot.

The social component aspect is an important cog in South Korea’s game app monetization machinery.  So, if you want your game to survive, let alone thrive, a social component in the form of messaging apps needs to be embedded in them. Messaging apps like WeChat, Line, and Kakao Talk are best suited for this job.  Integrating these messaging systems means the game automatically reaches hundreds and thousands of potential gamers. Talking about KakaoTalk, it has got a 90% penetration rate in Korea, and over 70 million users in other countries, which makes it a must-have messaging app for all types of games.  All sorts of people, be it rich or poor, young or old are using Kakao to communicate.  No wonder, app developers/app publishers are harnessing its power to sell their games through it. The messaging app, in turn, takes a cut of the revenues. The messaging app allows you to invite friends to play, share scores, and more. And, if you don’t mind promoting the game , you could even earn virtual money to buy more in-game features.

Caveat: In keeping with the Kakao terms, every centimeter of the game has to be localized. If not, Kakao people will simply ignore your game.

Koreans are average in English. Meaning, they want their apps to be in Korean and not in some foreign language like English.  Moreover, the local game market is already doing good and has whetted the appetite of Koreans in favor of localized games.  So, foreign gamers jockeying for space should ensure that their game is localized enough to strike-the-right-chord with the Koreans.

For the starters, the national writing system of Korea is referred to as ‘Hangul.’ It consists of 24 consonants and vowel letters grouped in blocks. Each block has 2 to 6 letters, with at least 1 consonant and 1 vowel. And the text is written from left to right, or from the top down.

So much for the text part. Even the images have to have the Korean feel. Foreign games like Candy Crush, Minecraft, Clash of clans and so on have succeeded in Korea due to their localization strategies.

English and Korean are poles apart, which poses translation challenges and all.  So, chances of haphazard translation are more, going by their unique grammatical structures.

Plus, grammar and different variables could create greater glitches in the UI.

Marketing matters only when it is culture-specific. Candy-crush understood this underlying phenomenon and customized ads in keeping with the cultural context by including special emojis while spreading the word on Kakao Talk. Last, but not the least, rating board approval is a must for your games before they make their debut in the Korean game market. Both GCRB, that is  the Game Content Rating Board and GRAC, that is the Game Rating and Administration Committee, have to give their approval on games that are meant for 18+.

And, by the way, their’s some unhappy history that makes these approvals so, so darn crucial for publishers.  It’s said that since the onset of PC games, gamers made it a routine to sleep in cafes. More than that, it was distracting students from their studies. Not to mention news about the death of gamers and even children of gamers started making headlines. To put a check on this notoriety the government set in motion the “Game Industry Promotion Act” which, in a way, ensured that all games got rated before they were launched, including the mobile games.

So, don’t forget, to include this additional budget when entering the country.

The costs according to the Game Rating and Administration Committee: 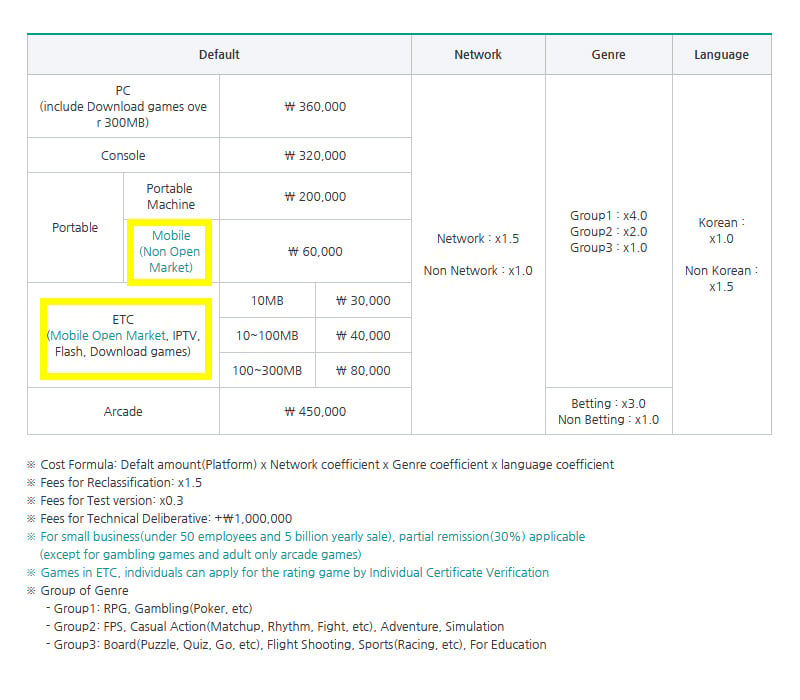 While western developers invest in iOS, in Korea Android works. Android, in fact, has conquered nearly 90% of the market. One of the primary reasons for this is domestic hardware manufacturers like Samsung and LG and domestic game developers tend to take an Android-first approach.  Not to mention Apple is still trying to gain foothold in the marketplace.

Needless to say, cracking the South Korean Game Market is easy if the aforementioned tips are accounted for. For more info on the same, get in touch with the app marketers or drop in a word in the comment box below.