Zombie Apps? Does that raise an eyebrow? Well, it shouldn’t for Zombie apps are, in fact, a fact today. As per app analytic firm Adjust, there are (hold your breath) 1,136,501 Zombie apps (read: lifeless apps) walking around aimlessly in the app stores today. The iOS App Store has 82.8% zombie apps – of the 1.42 million apps – as of December 2014. 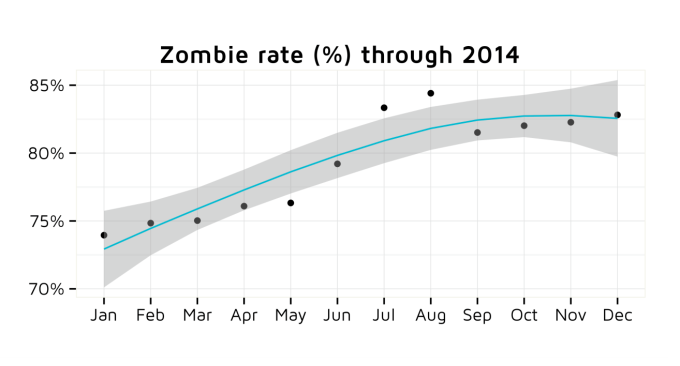 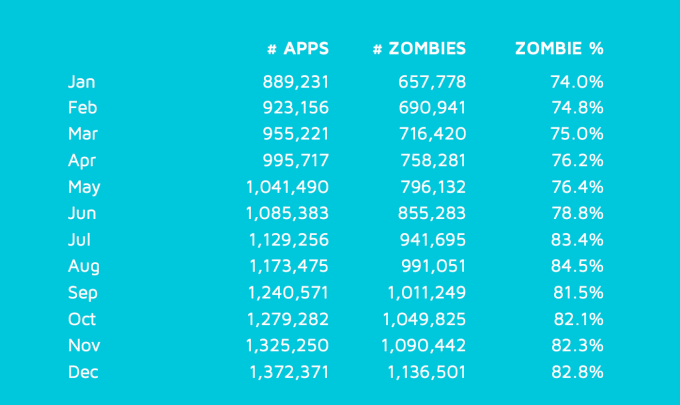 Yes, it’s a hell of a situation out there. Zombies are taking over the app stores in big numbers.

But, before we talk more on Zombies and their attack, here are some notable stats about the steadily growing app economy. (Facts and figures as per app analytic firm Adjust)

First Things First: What is a Zombie app?

If the app does not make it to the top 300 lists in two out of the three days in the App Store, it is labeled as a Zombie app. If you want to locate a Zombie app, you can do so by searching for the specific type of app, or by searching the app name directly.

Currently, there are 155 iOS country stores displaying 300 apps in 23 different genres, not to mention 18 additional sub genres under “Games.” Plus, there are free and paid listings. Which means, there’s a fair chance for several potential apps to make to the top list. But, it’s easier said than done.

As stated by Adjust some competitive app genres, such as business category, gives a tough fight to the new apps aiming to enter the category. And,since these categories are controlled by a handful of successful apps worldwide,  a new business app has least bit chance of entering into the app store, turning it into a Zombie app automatically. In such an event, how do you save your app from a Zombie attack?

6 Ways to Protect Your Apps From Zombie Attack

Categories such as Finance, Weather and the like, ensure favorable Zombie ratings. These categories will at least stand you a chance of making it to the top 300 list in the app store and not get your app labeled as a Zombie instantly.

Even Navigation and Sports app categories are good. Given they are location-specific, the competition is much lower as opposed to other categories.

In fact, there’s an inverse relationship between category sizes and Zombie rate. The smaller the category size is, the better the chances of your app making to the top list. For instance, if you are devising a ‘whether app’, your chances of appearing in the top 300 list is comparatively higher than other top categories brought together.

So, it’s  important to carefully zero down on those app categories that experience less competition. Apple allows developers to choose from any three genres. Selecting those with lesser competition helps your app escape the zombie attack. 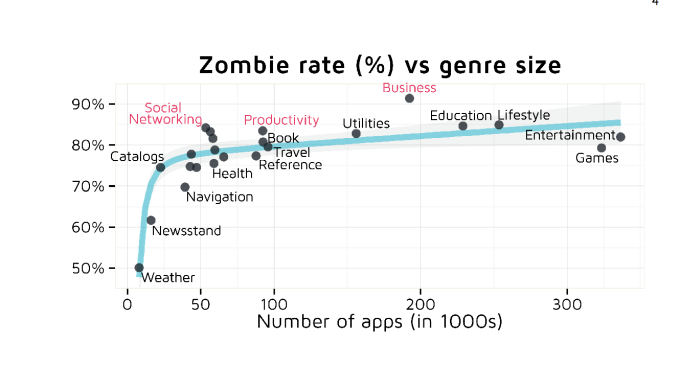 Because if you submit your apps in genres with 250,000 apps and beyond, your app is sure to enter the dead zone in no time. Case in point: The “Games” category with over 80% Zombie rate. Some 22.9% brilliant app makers understand this and list their apps in a sub-genre category and not in the main category. They steer clear from the top ‘Games’ category totally. By localizing apps in other languages you can increase the potential user base. For example, German and Chinese have better app ecosystems as opposed to Japanese and Russian. The Germans had 265,000 apps available in December 2014, closely followed by Chinese with 2,18,000 apps. So its common in both these countries to release apps in their native tongues as well as in English.

In Japanese and Russian markets, there are 170,000 and 121,000 available in their native language. The Russian app growth rate was 67.5%, which is slightly higher than the global growth rate of 62.3%. However, Japanese market had only 54.9%, which shows the app market is in a deceleration mode here. In other words, lesser number of apps are being localized here.

Having said that, converting your successful apps into Japanese or Russian ensures more favourable zombie rate. Simply put: The smaller the market size, the better your chances of your app showing up in the app store listings – a trend similar to that of the genres – as fewer apps are said to compete for the local lists. 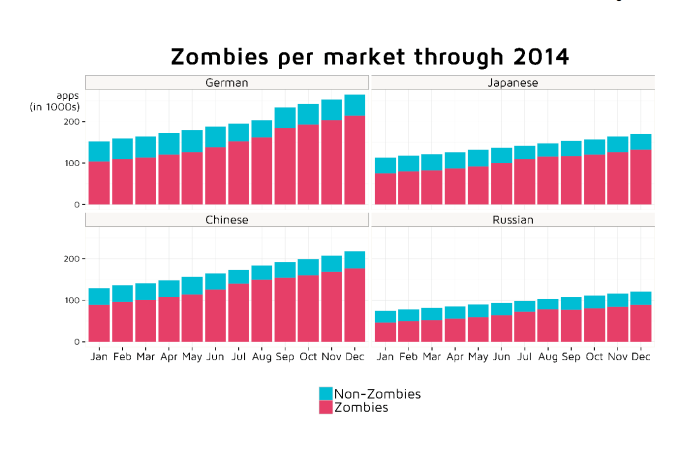 The rise of Zombie apps underline the fact that app store optimization (ASO) techniques are being under utilized. ASO is the key to make your app more and more discoverable in the app store searches.

With 526 million monthly active users accessing Facebook, the social networking giant is one of the best medium to promote your app. You can set up a Fan page, which will guarantee an organic reach for your app. You can even opt for paid engagement in the form of Facebook ads. Plus, you can work out dedicated mobile campaigns for Facebook to attract users.

Cost per install and  Cost per click are two other app advertising techniques that’s breaking new ground these days. Both these techniques employ third party apps as a marketing platform to accelerate your app installation numbers among users.

We can save your app from turning a Zombie. Yes. No kidding here. If you ask us how? The answer is: by simply underlining the relevant App Store Optimization (ASO) techniques and then applying them vigorously to your apps. Additionally, we will help you with loads of other app optimization techniques as well. Be assured, we will make your app highly discoverable on the app store.

OpenXcell is a brilliant app developer and app marketer to behold.  So, if you are pursuing any serious app development and marketing plans for your organization, OpenXcell will be happy to help. We have the experience and wherewithal to make your app a super success.