Mobile App landscape is a pretty dynamic space. A lot happens in the matter of weeks and months. Let us look at some of the prominent trends that have been spotted this Quarter so that app developers can take notes and strategies better for the future. 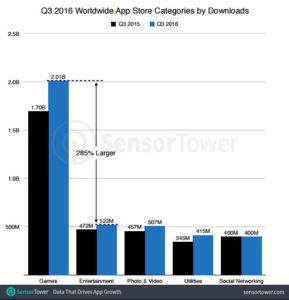 According to Sensor Tower’s Q3 2016 report, the fastest growing category of Apps downloaded from both App stores and Google Play stores has been that of Games. This group has grown at the rate of 18% year over year in the case of App Store. The estimates here include app downloads of both iPhones and iPads from the period starting on July 1, 2016, to September 30, 2016. At Google play the Game category has grown at the rate of 16% year on year. The category is nearly five times larger than the Tools category which is the second most downloaded category at Google Play store. 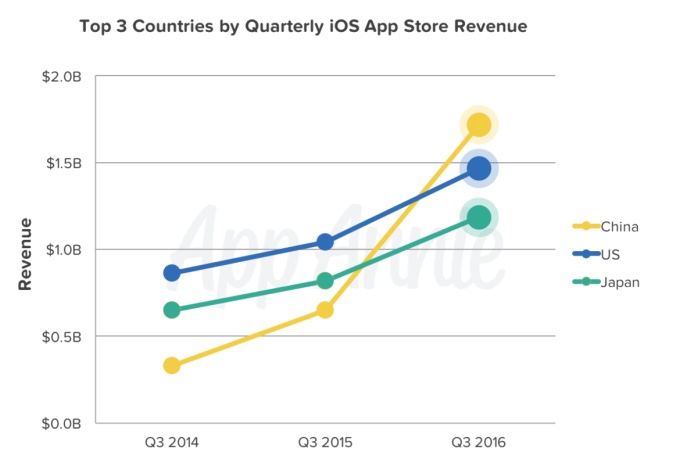 China now is the largest market in the world drawing the maximum App Store revenue. Chinese have been downloading apps from the App Stores in big numbers. China’s rapid App Store revenue growth is driven largely by game apps. “China shattered iOS revenue records with the highest reported this quarter to date for any country. China also not only maintained its spot as #1 for Games (which it earned last quarter), it is now the largest market in the world for iOS App Store revenue, earning a record $1.7 billion. Now leading the United States by over 15%, China’s growth is projected to climb further by 2020,” says App Annie. Pokemon GO has proved to be the most successful app launch till date. It has broken all of the previous app engagement and app revenue records. Its earnings reached the magic number of $600 M in the least number of days. It reached $600 M in revenues 2.5 times faster than Candy Crush Saga. Candy Crush took more than 200 days to reach $600 M. Pokemon GO was 5 times faster than Puzzle & Dragons. It took Puzzles & Dragons more than 400 days and Clash Of Clans over 500 days to reach the magic figure of $600M.

The game app resurrected a dwindling IP with the help of Augmented Reality and made it a super hot property. The game may have lost some steam, but with new updates, interesting partnerships and movie deals in the bag, it is ensuring its sustainability. Worldwide iOS and Google Play app download trends have been kind of interesting. The estimates here include global downloads for iPhone, iPads and Google Play for the period that starts on July 1, 2016, to September 30, 2016. Pokemon GO leads the tally.  Uber App which was at number 17 overall in Quarter 2, rises ten ranks and is at 7th rank in Quarter 3. The progress of Prisma and Bitmoji is keenly watched. They have done well for themselves. Messaging apps like Whatsapp Messenger, Facebook Messenger, and Snapchat are at 3rd, 4th and 6th position respectively.

These are the few data points I gathered up for you this Quarter. That is all from my desk for now. Until next time, Adios.