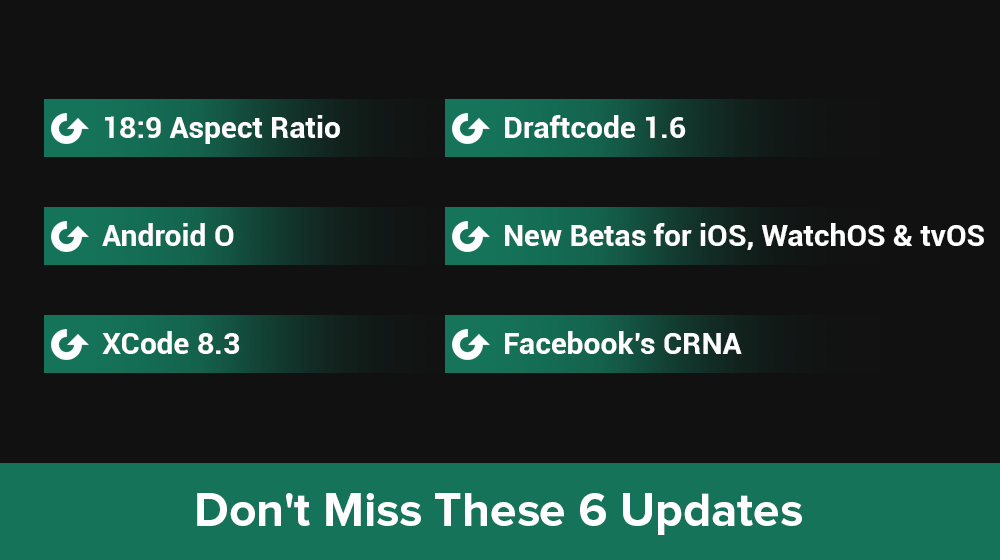 A lot has been happening on the app development front. We are here to bring the latest for app developers. You must know the new, the happening and the useful. These informative bits and bytes can help you save your precious time and resources. So, what’s on our radar screen this month? Read on.

#1 Google Wants The Developers To Ensure The Apps Work With 18:9 Aspect Ratio

Recently, both LG G6 and Galaxy S8 introduced larger aspect ratios for their displays. LG G6 has 18:9 aspect ratio and Galaxy S8 has 18.5:9 screen size. Google wants app developers to make apps that fit the new ratio. The current standard ratio of 16:9 which works for all the devices doesn’t work for these two. In an official blog, Google says, “In order to take full advantage of the larger display formats on these devices, you should consider increasing your app’s maximum supported aspect ratio.” Google is supporting the aspect change and we are more likely to see more devices with these new screen sizes in future.

You now have the chance to play with Android O’s developer preview. The first version of Android O would not be available in Android Beta program. Android O has pictures for Pixel, Pixel XL and Pixel C along with Nexus 5X, Nexus 6P and Nexus Player.

Earlier developers could draw on top of other apps and the system UI but now with Android O, Google has deprecated TYPE_SYSTEM_OVERLAY and has replaced it with TYPE_APPLICATION_OVERLAY.  The use of non resettable device scoped identifiers has been limited. There have been updates in the way applications request account information. More user facing control is provided. In this new version Net.Hostname provides the network hostname of the device.

When the device is updated to Android O, the Android ID of the app remains the same. Once you uninstall and reinstall the app the Android ID changes. Battery life gets better and the apps run faster with Android O. You can read more about Android O here.

#3 Binaries Bitcode Explosion Due to XCode 8.3

Apple’s newly released development suite Xcode version 8.3 brought on the binary bloat. Developers were surprised by the change.  J. P. Simrad, a senior engineer with mobile database maker Realm discusses the issue in Openradar, a public bug report sharing site here. The problem became obvious when Objective – C iOS framework was compiled with Xcode 8.2, it measured 55MB. When the same code was compiled with Xcode 8.3 the binary bloated to 158MB.

According to J. P. Simrad, it could be a bug that cropped up due to some internal change – due to some combination of code the bitcode size increased. He advises developers who are using Xcode 8.3 to downgrade to earlier version and use that until the problem is addressed.

Draftcode 1.6, an important update to Solesignal’s popular PHP Development App for iOS devices has been announced. It allows offline development of PHP on iPad or iPhone. It features a light and dark editor theme with variable font size, a code editor with PHP syntax coloring and an easy to use workspace to navigate files and folders. It includes all generally available PHP extensions like OpenSSL, FTP, MySQL, PDO, SOAP, XML etc. Its runtime provides the web server environment for sessions, cookies, POST/GET/PUT. Draftcode runtime allows inspection of PHP errors during execution.

#5 New Betas for iOS, WatchOS and tvOS from Apple

iOS 10.3 beta can be directly downloaded to iPhones and iPads over the air. It is also available from Apple’s developer portal. iOS 10.3 update includes a secret one-handed keyboard.

A new theater mode to Apple watch has been added in WatchOS 3.2. Theater mode when activated disables screen alerts. To see notifications, you just need to tap the digital crown and the display turns on.

In tvOS 10.2 there again are few new features. There is a new faster scrolling performance. Users can now swipe through the content faster. A swipe on the right side of the Siri remote allows users to navigate desired indexes. When you go for a longer swipe on the remote new scrolling mode gets activated.

Facebook has made building apps across platforms easier. You can do that with the help of CRNA – Create React Native App (CRNA). You don’t even need Xcode or a Mac or Android Studio for it. With its help, an iOS app can be developed using Windows or Linux. CRNA projects are written in pure JavaScript. There is no need to compile any native code. With CRNA you will be able to access different APIs like camera, maps, Facebook authentication etc. When you need to include native code in your project you can do that easily with Create React Native App. CRNA makes building and testing apps easier.

And that is all from my desk for now. Until next time, Adios.