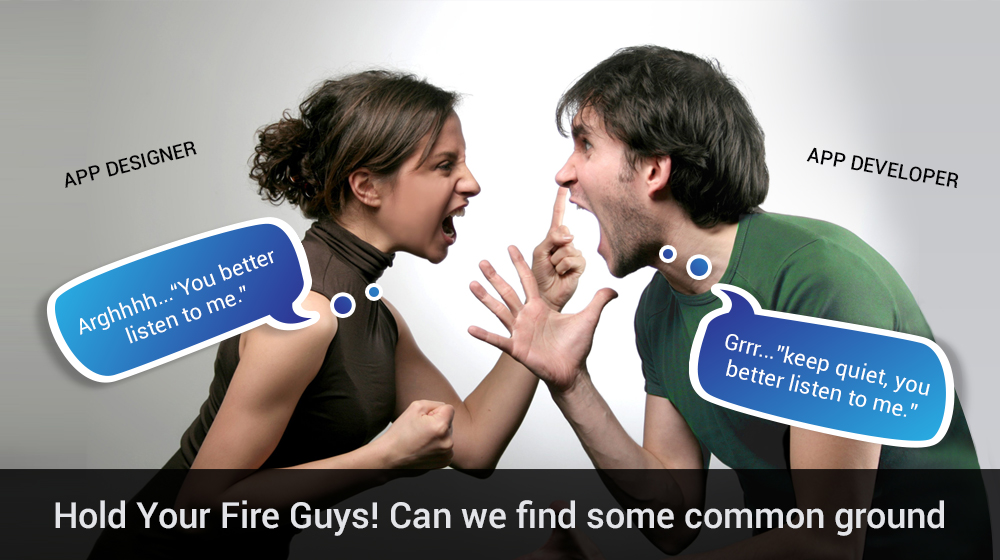 There were wireframes all over the place in William’s cubicle – desk, chair, drawers, floor.

“Oi Williams, neck-deep in work,” I muttered under my breath, so as to not disturb him.

“Nope, it’s just that they are so pointless now,” said William smugly, as he pointedly eyed those scattered wireframe documents on the floor, and at the same time was busy balling up a few more, to be stowed away.

“Those ruddy app developers have apparently steamrolled our designs. To hell with them! The final product in no ways resembles our design. Can you believe that?” William added in an agitating tone.

“Relax… Williams, why get so worked up? By the way, did you ever bother to keep those developer blokes in the loop while designing the wireframe?” I quizzed him, my tone quivering a little, for I knew what he would answer.

“U mm…apparently not, I always wanted it, “My Way” but then it has backfired now, you see. Eventually, word was that our designs were too boisterous. All that effing efforts, don’t count for anything now,” the rock star app designer groaned.

“Goodness Gracious! You seriously never thought of having the developers in the loop even for a single moment? Wasn’t that the right way out dude? Now, what? You will have to pay the price. What else?

Tell me, about your company? As in, do you have villains (read: Williams) in your company. If yes, what I reckon is that, you are in deep, deep trouble. Make them see sense, as soon as possible. Ask them to come out of the “my way or the highway mentality.” Tell them categorically, that any consummate designer, or for that matter, big-shot developer cannot achieve things of their own accord. Team work or collaboration is crucial, however, good they might announce themselves to be.

So, go ahead, hold a round table conference straight away. Ensure that both designers and developers chat up before embarking on their app development project. This will ensure that they are on their same page in terms of their app vision.

Here goes the common designer, developer issues and how to broker peace in between them.

Yep! That’s always the case. As  a determined app designer, you may go ahead and coolly built those breathtaking sand castles in the air for your app.

But then, have you, for that matter, even for a split second, got into the developers’ shoes and thought through the coding process of your app design? I mean, whether your stunning blown-up, mock-up UX and UI designs could anyway be actualized by the developer?

No doubt, a static mock-up that’s mildly interactive and powered by all those gorgeous bells and whistles could mightily impress the client. But then, honestly, if developers don’t feel good about them, they might as well discard them.  Yes! This is where the gulf arises. When the mobile app developers are unable to live up to app designer’s intent.

The heavy animation, highly dynamic UIs may be a visual treat for the clients, but the developers might find it too hard to code. And, if at all, coding is made possible, the development process,  may go on for several months or so, which again might not bode well with the clients.

So, all this culminates into bad blood between the app designers, the app developers, and the client.  A client, on the other hand, who might be sitting with fingers crossed, envisaging a great app in the making, may be in for a surprise, when he actually gets to look at the final app.

This leads us to another issue…

Sure enough, prototype or mock-ups are one of the finest mediums to convey the look and feel of the app to the client. Come to think of it, it makes communication between the client and the app development team effortless.  Nevertheless, what may seem easy for mobile app designers might as well turn out to be a tough nut to crack for the developers. Much as designers find it easier to incorporate animations, UI concepts and rich media content to the mock-up, the  developers find it that difficult to code those parts into reality.

So, if those designs cannot be developed, it will automatically mean loss of designer’s time and effort, consequently resulting in new rounds of design, emergency meetings and patchwork documentation, all leading to increased costs.

On the other end, the wireframe might have already received the client’s nod and perhaps would have made its way to the developer’s desk as well.

It’s a given that designers do their best to please clients. So, more often than not, they choose numbers, names and images that best responds to user inputs. But what needs to be understood here is that user inputs, no doubt, is an important criterion for app development, but the designing  process should be kick-started, most importantly, with developers’ inputs.  Because simply going ahead with user input, may more or less, render the app absolutely useless, given that it could lead to UI issues and all.

There are cases when the gulf between data and design becomes evident only when the app has already made it to the users’ hand.

Designers go, learn some code. No offense mates! Or, else simply work a way around this. The whole point here is that designers should first gain a thorough understanding of the app, be it’s UI features or the art assets, and then bear in mind the different platforms it’s supposed to target, before embarking on the app designing process.

For all intents and purposes, an app designing is not at all linear process, but ought to be an organic one.  So, the developers and designers ought to work towards a common vision – all the while ensuring that their vision could be effortlessly translated into reality.

For one, they can  even come together and create a component diagram that could help developers easily comprehend the process. As per 2014 stats, more than half of the developers informed that 25 to 75% of the app projects receive revisions, which directly impacts the UI. About 45% said that they need to put in 25 to 50% extra effort to address issues that directly impact the UI. And then, about 5%  said that they need to exert double than the original development effort for making changes in the app.

All these changes and revisions slow down the development process. So, the best way to out is to get the stakeholders up to speed, be it the app developers, app designers, or clients and freeze on the UI and UX elements of the app, before starting the work on your app.

This will ensure the least number of changes and, in fact, accelerate the app development process as a whole. What say?