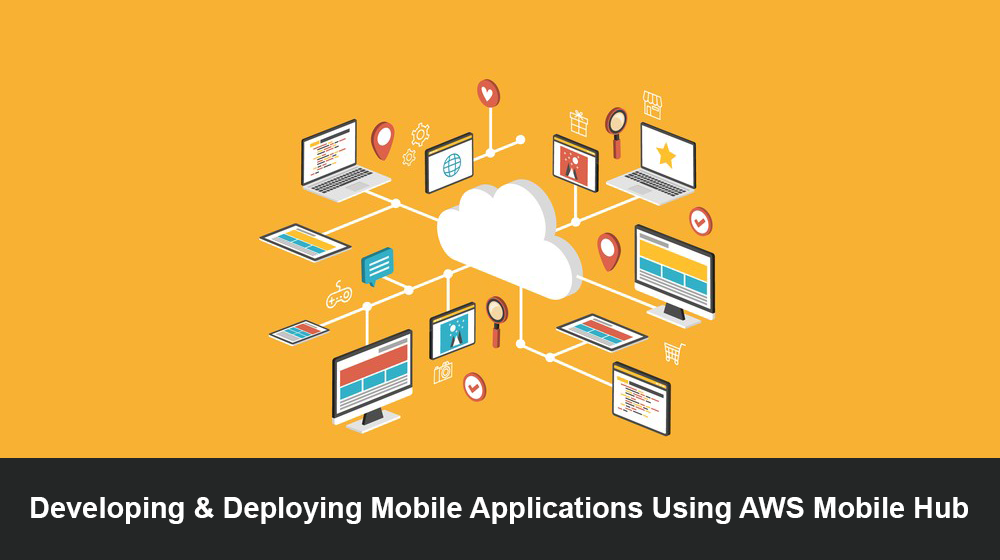 With the introduction to Cloud Computing, there has been radical changes noticed in the development and deployment methodology. We came across to the term virtual servers which increased the productivity of developers by streamlining the development process.

Earlier, a developer was responsible for managing various operational tasks like security and storage maintenance, content delivery, etc besides developing. This consumed a lot of time and energy. Now, the developers without any worry can focus only on their core work, i.e developing, rest of the tasks are carried by cloud servers.

There are a number of cloud-based platforms which provide wide-range of services to users. Amongst these is Amazon Web Services (AWS) which is proven to be the best. We will be learning the use of AWS in mobile application through this blog.

The top priorities for developing B2B, B2C and B2E mobile applications are;

Netflix, Shazam, Yelp, Hike, etc are the top ranked applications that run on AWS. With astonishing user experience, the backend of these apps is scalable and robust as it is designed using microservices and serverless architecture.

The traditional approach involved intricacies for a developer to understand the code as each function and each variable defined was interlinked. Furthermore, depending upon the requirements, physical servers were purchased and maintained which increased the maintenance cost. With the introduction to Cloud computing, developers adopted microservices and serverless architecture and bid goodbye to the traditional method.

Microservices or micro computing allows developers to fragment one task into smaller portions and reduce the coding complexities. However, a group of developers can focus only on these smaller portions individually, deploy the code and share the data via JSON, REST API and SOAP.

Serverless Architecture allows developers to run and resize the storage capacity of the application depending upon the requirements without provisioning and managing servers. Moreover, the lambda function is used to instruct the servers about the task by executing the code on AWS Lambda. 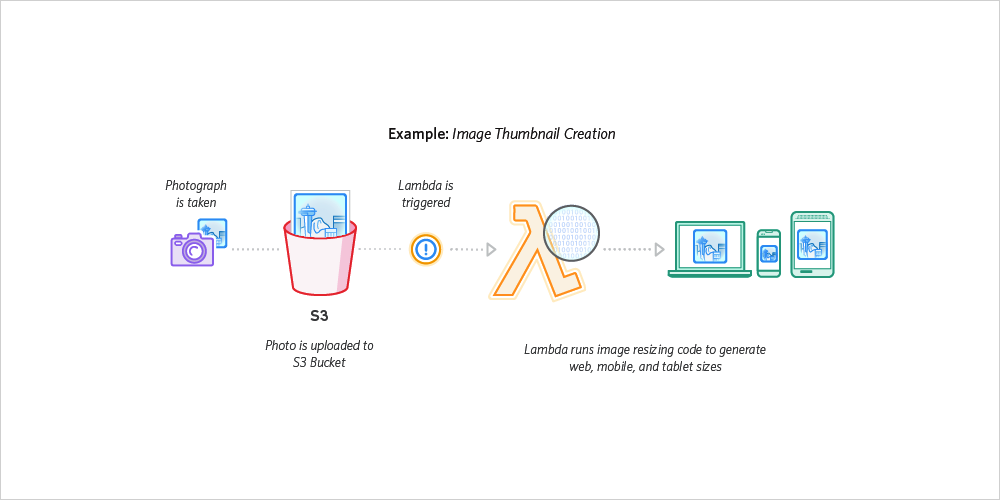 Apart from developing, deploying is also an important phase in the application lifecycle. Thus, it’s important to know the different solutions that can ease the development and deployment process. A developer can create serverless microservices on AWS using; 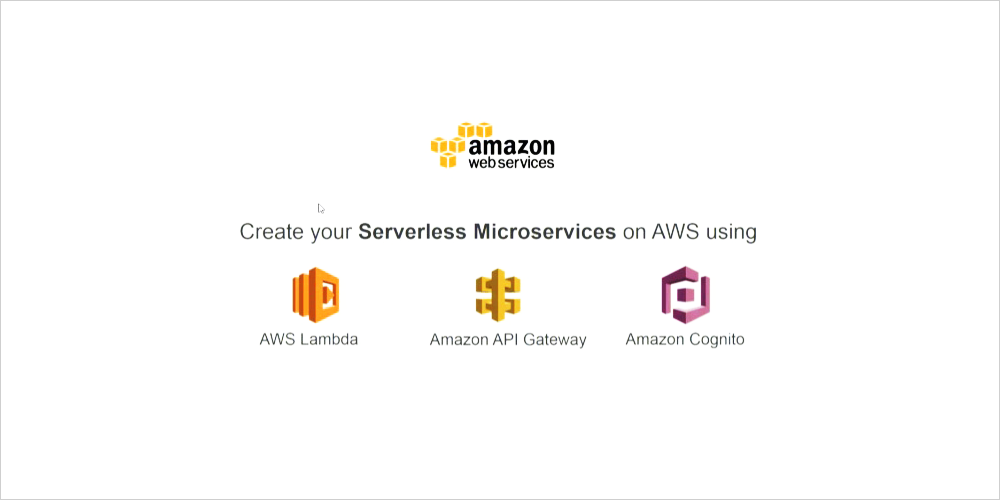 → AWS Lambda is the advent of managing any of the code infrastructures. Moreover, it also allows developers to scale the servers based on the requirements. Therefore, AWS Lambda is solely for managing, provisioning and scaling the servers.

→ Amazon Gateway API acts as a front end of any application. It helps developers to create and publish API at any scale resulting in boosting the performance. Further, it has additional features such as catch-all-path, any, and proxy integration for Lambda function and HTTP endpoints. Gateway manages the task involved in accepting and processing concurrent API calls, traffic management, authorization, access control, monitoring and API version management.

→ Amazon Cognito allows users to sign-in and sign-up to their mobile or web apps. Developers can authenticate users via social media profiles such as Facebook, Twitter or Amazon with SAML (Security Assertion MarkUp Language) identity solutions or creating their own.

Following the above mentioned, three intriguing new features are introduced in Amazon Web Services Mobile Hub such as; 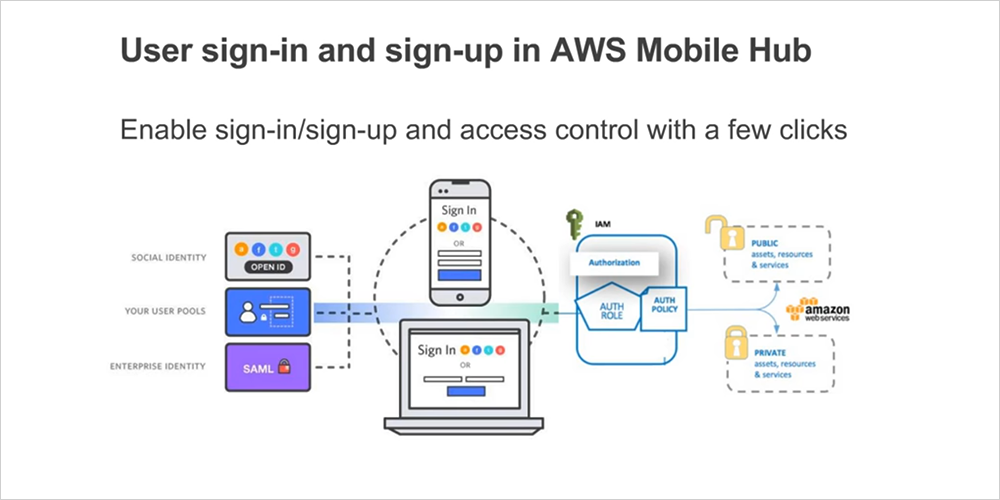 Custom Connectors help developers to build their own connectors to connect to AWS or corporate/on-premises resources.

The mobile application has an access to Amazon Gateway API that connects to the private VPN for fetching the data from the on-premises system of records. 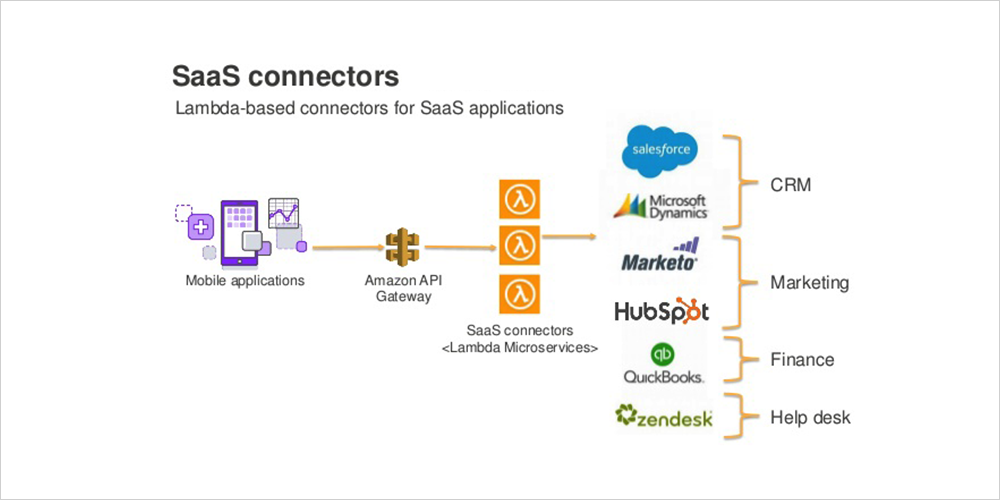 This is a new approach in the mobile technology world which has changed the way developers develop a well-defined application. Earlier, the apps were developed using monolithic architecture (tightly-coupled model) in which the functions and variables defined were interconnected. Therefore, changes made in any functional code updated the entire application resulting in increasing memory allocation and load time. Now, as AWS provides microservices and serverless architecture, developing has become an easy job for developers. This decoupled architecture helps developers to create and activate new microservices without having any coordination with the other microservices. Ultimately reducing the code complexities, memory allocation and making the app perform faster and better.

Hey, are you looking for a technology partner who can help you in designing serverless architecture for your existing app? Do contact us, our adroit team will help you in doing so.

Hi friends, This is Roma Kapadiya, a Digital Marketing Specialist, SEO Consultant & Blogger at Nimblechapps – fast-growing hybrid app development company. I have over 5 years experience in SEO. I love to write on new and upcoming technology, startups, programming tools, and business and web design. When I am not writing, I read, so I can write more..