Game App Developers Why China Should Be On Your Radar?

It is no secret that the game market is slowing down in the West.  Admittedly, Japan, China, and India are the rising stars of the gaming world.

In fact, the number of Chinese gamers has already surpassed the number of American Citizens.  According to Newzoo, the Chinese gaming market would be churning out a revenue worth US$7.7 billion in 2016, while the U.S. will be running closely behind with $7.3 billion. So, as a Game App Developer, no matter what, China should be on your target for the forthcoming year.

Agreeing to China’s unhindered dominance in the gaming world, Peter Warman, co-founder and chief executive of Newzoo said: “The fastest growth in mobile games is happening in China and the surrounding Southeast Asian market.” 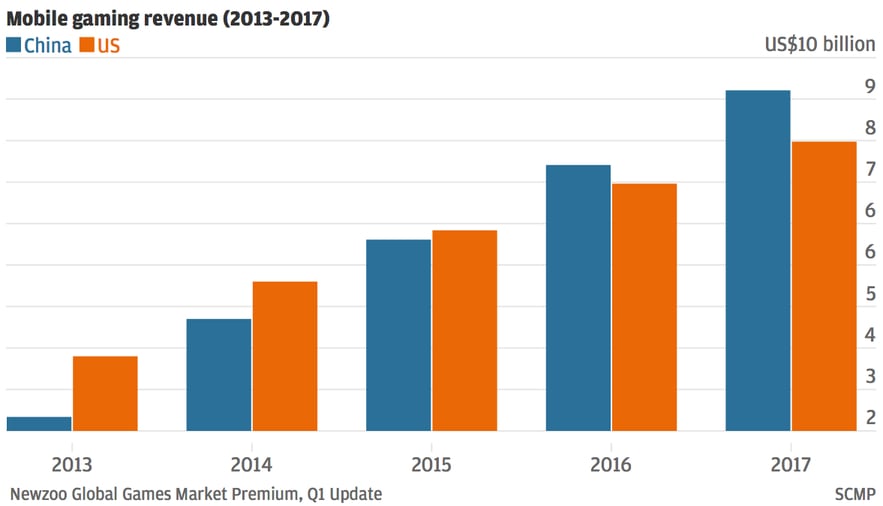 China to overtake the U.S. as world’s largest mobile gaming market by 2016

Of the total game revenue of $22.2 billion in 2015, the mobile game apps contributed nearly $6.1 billion

Without Further Ado, Top Reasons Why The Chinese Game Market Is So Fertile?

For one thing, it’s because of its sheer population size, which is almost 4 times that of the U.S. Another thing is, it has 3 times more smartphone users than the U.S.  And more importantly, the 14-year ban on consoles, has fueled the hunger for games like never before.  Furthermore, the spike in games has also contributed to the recent success of  iPhone 6 and 6+ here.

Target the local Chinese language. That’s it! Right? Wrong. Chinese, for your information, follow two different sets of characters, specifically, when it comes to written communication.  So, you really need to sit down and decide, which of the two best suits your game temperament. Is it Simplified Chinese? Or, the Traditional Chinese? Simplified Chinese characters are used in mainland China and Singapore, on the other hand, traditional characters are used  in Taiwan, Hong Kong, and the overseas Chinese market.

Much as developers ballyhoo about the simplified approach, a tinge of traditionality has its own magic. So if, as a game developer, if you could balance both, nothing like it.  So, devs do to keep the Character thing  in mind, if China market is on your radar.

Chinese and English have one thing in common: Both are compact languages. But then, the Chinese is more complicated given that the sentences come in short strings or the characters are square-shaped.  So it’s crucial for the developers to keep the Chinese fonts in larger sizes. To cut to the chase, the vertical spacing in Chinese should be more than the English version.  Horizontally, it won’t cause much trouble given that the  former appears shorter than the latter.

Plain text is completely despised by the Chinese. A potpourri of idioms, internet slangs, and  formulaic expressions could help catch the fancy of gamers. 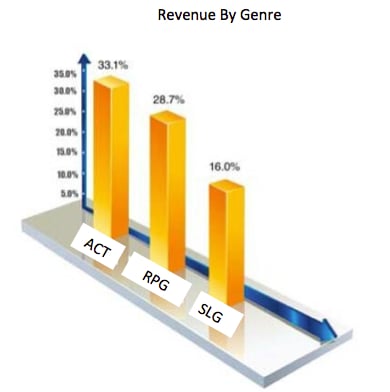 As per ‘China Gaming Industry Report,’ published in March 2015, the top three mobile game categories that are minting yuan include Action (ACT), Role Playing Games (RPG), and Simulation Games (SLG).  It has largely been observed, by the app industry experts, these genres fetch higher LTVs and longer life cycle. So, if you intend to make a spectacular entry in the Chinese market, target these three genres. Plus, it’s said that free-to-play games are catching fire and by 2017 it’s said to blanket almost 80% of the Chinese market.

Font issues would have to be confronted, every step of the way when it comes to China market. For the starters, the Chinese language consists of no fewer than 80,000 characters.  And, the best bit about this is the fact that if you have the working knowledge of at least 5000- 6000 words you would be considered as an average Chinese literate. And, if you could make out at least 2000 Chinese words, you could, at least, confidently, flip through the Chinese magazines.

However, the game apps come with a different game play altogether.  To put it more explicitly, games are backed by bitmap fonts, which cause memory problems.  The conventional approach is to first scan the translated text and then extract the required Chinese characters onto a larger bitmap, which then is used as a reference point.

Huh! Opting for the literal translation of your gaming text? Nope. Don’t do it. Because literal translation could turn suicidal for your apps. Um…haven’t you heard of those legendary Jesuit Missionaries who had literally transcribed the name of Jesus in Chinese, using consonant characters.  The outcome: 亿 鼠 (Ie Shu – a hundred million mice).

The bottom line:  Rope in a native speaker to translate the name of the game, in addition to, the names of other gamers. They’d come with a more sensible translation.

Once your app is done, in terms of translation and all, don’t be in a hurry to launch it. Get it checked all across China. Cover every nook and cranny. Be it North or Central, or West, or South-east, or the South of China, get your apps proofread from each of these places.  Because a northerner won’t probably understand the word “哈 喽” and probably only a Westerner could discover the joke behind  吃葡萄不吐葡萄皮，不吃葡萄倒吐葡萄皮. 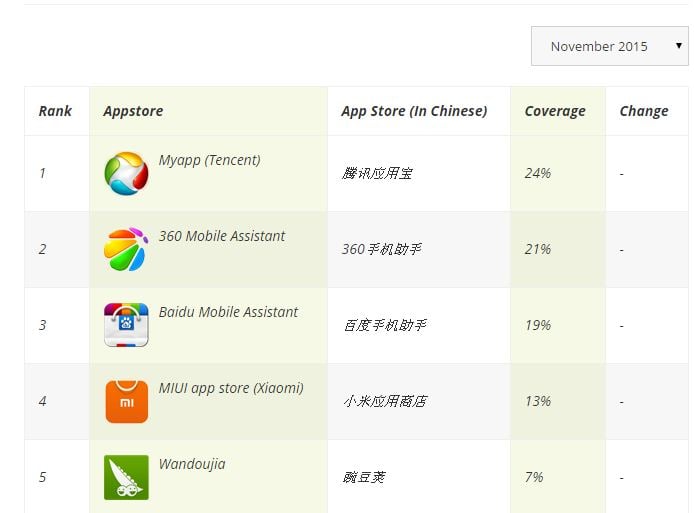 Yep! You need to play safe with numbers as well,  given that the Chinese numbering system is diametrically different from the English system.

Below is a conversion table between the English and Chinese number systems, which will help you clear all your confusion. 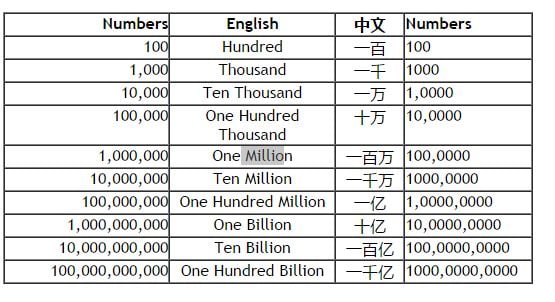 So, you can see for yourself that the regular English gradation is not followed in China. Therefore, it’s imperative to bear this in mind while incorporating numbers in the game.

When to comes to localizing a game app for China, developers need to whittle down to two main art styles:

Cute characters and stylized art wield greater power in the Chinese casual game market.  So, it’s a commonplace to find game characters with 3:1 or 4:1 body proportion in China.  So if,  for some rhyme or reason, you are planning to add some realistic character style for your app, just drop the idea. Because it won’t work here. 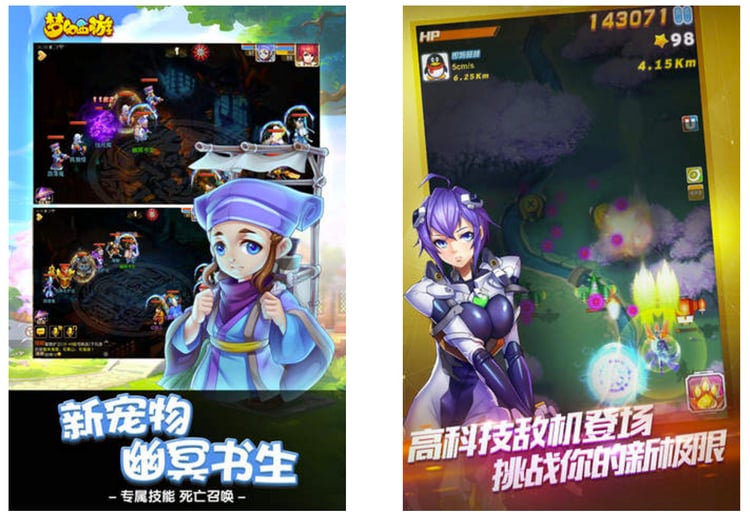 But, if you really like the idea of realistic characters so much so that dropping is out of question for you, in that case, target the hard-core mobile games. There you are free to come up with good-lookin’ sexy female  characters, to be used as a bait to attract male players. Warning: This style is strictly meant for hard-core games played by hard-core players 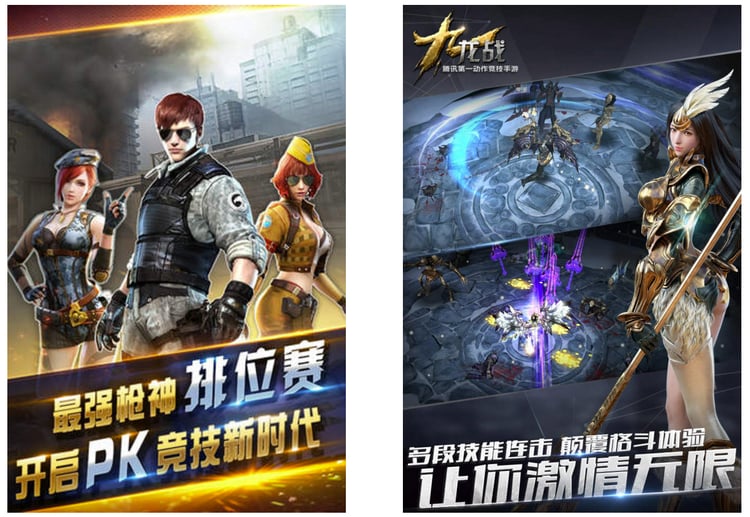 China follows strict copyright policies.  So, you’d be heavily penalized if you are found using unlicensed content or pictures.  So, get all your documents perfectly translated, notarized and even approved by the Bureau of Copyright Protection, before use them in your app.

If you plan to embed  the links of third-party service providers, think twice. It’s because they won’t work properly in China and in all probability. For instance, if you want to download a 25 KB webpage, you might as well end up spending ages on it.

So, it’s always better to rope in local service providers instead.

Go by the local payment channels, such as Alipay, PayEase and more. Why? Simple: You cannot use the services of international payment aggregators.

Install your internet servers in countries that are located closer to China markets such as Hong Kong, Macau, Singapore or South Korea.  Europe, USA or Russia is not considered ideal for installing your servers.

Does your user have the flexibility to generate content in your app? Yes? Good point that! But then you need to keep a check on this user-generated content as well.  If you don’t fulfill this basic requirement you could go to jail.

The Chinese Game market is lumbered with uncountable clones and copies of popular games. So if, you could manage to conjure some out-of-the-box app with some really amazing game play, bet, you’d have the gamers’ attention, fully. Puzzle game sensation 2048 was a blockbuster success because it was different. So, bet on innovative gameplays if, you intend to add that ever eluding virality to your app.

It would not only help add and retain more Chinese players, it would also push players to make more in-app purchases.

Chat apps are a big hit in the Chinese market, not to mention social media apps.  Nope. We ain’t talking about Facebook, or Twitter, or Youtube here. For your information, they are banned in China. WeChat and Weibo are are in, given that they are China-focussed.  WeChat, which started as a copy of WhatsApp, has 73% active Chinese users, while Weibo had about 212M users, as per Q2 2015.   So, if you want your game apps to attract those brilliant downloads, integrate chat apps and social media features into your app.

For instance, Fruit Ninja has joined hands with iDreamSky, and has also integrated WeChat feature. This helps  players connect with the other gamers, and also participate in a centralized competition system based around their WeChat buddies. 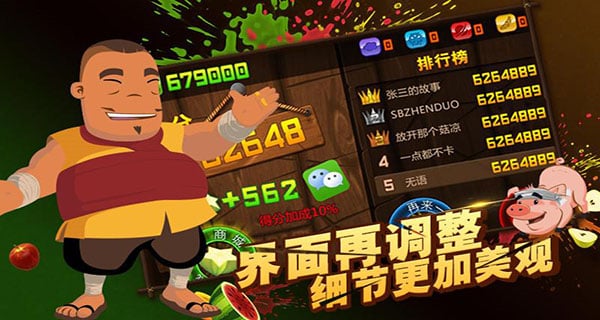 But then, you need to sell the right stuff in, in-app purchases. As in, it should consist of tools that help the gamers on the customizing front. For instance, gamers love to create personalized characters with unique outfits. So, if you can provide them tools that help with that, it would be great.

For instance, GunZ Dash, has set up a lot of personalization items in its in-app purchase thing.  There are an assortment of characters, pets, and items to pick and choose from. 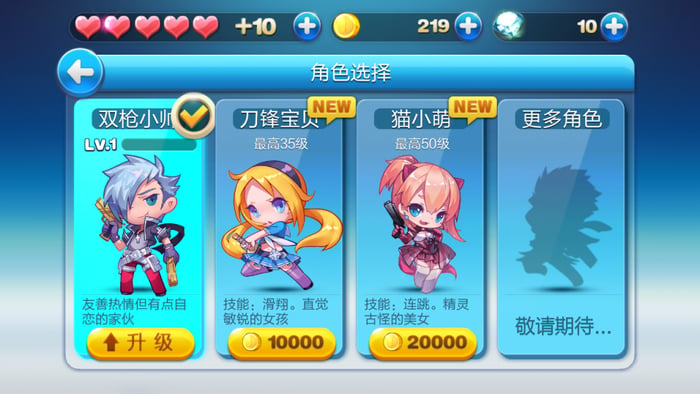 As you know by now, the Chinese gaming market is pretty unusual. But when it comes to selecting publishers, there are set standards. For one, only opt for familiar brands. So, if you have made up your mind to market your game app in China, join hands only with top game app publishers such as iDreamSky. The company optimizes third-party games and delivers it to users  through proprietary distribution channels, In-game cross promotion, and payment operators.

Android is a confusing mess, given that Android developers need to join hands with middlemen to make their games commercially viable. IOS, on the contrary, is free from such hassles. IOS Developers can easily reach tons of consumers, thanks to iPhone 6 and iPhone6 + growing popularity in China.

Over to you now:

Have I missed out on any of the indispensable points? Yes? Go ahead. Add them in the comment box below. We’d love to hear them all. And, yes, don’t forget to reach us for all your game app development and marketing needs. Ciao