This or That? Yay or Nay! Hot or Not? – This ever-so-famous comparison game has been named multitudes of times, but the spirit remains the same over the years. For that matter, this idea of choosing between two things is so intricately looped in our day-to-day interactions that we end up reminiscing it unknowingly. So, why are we even thinking of it right now! Well, the truth is that now you have an app for that!

Wishbone, very much like its name, is a home for comparing social content. You, being the user can pick your preference out of the two given choices and then explore what rest of your friends voted for. You think you have some smacking wishbone ideas in your mind? Make your own wishbone and share it with your friends. 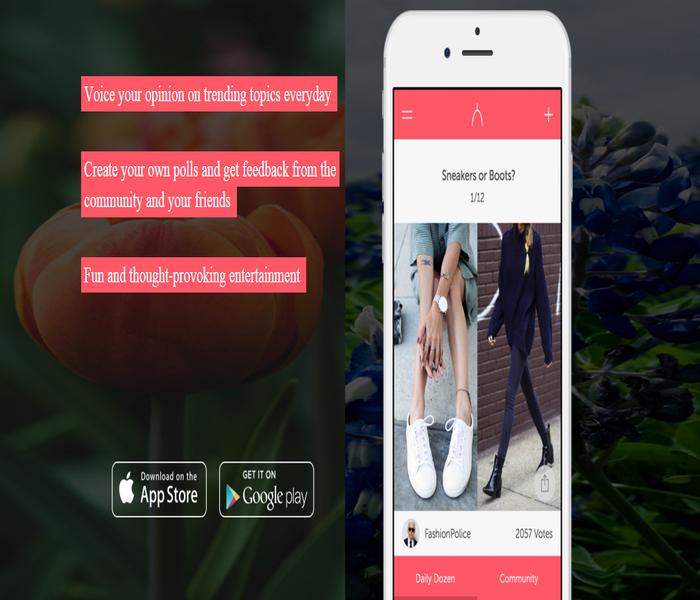 Considering the interaction process of a user with this app, every morning you receive a new “Daily Dozen”, that comprises of 12 pop culture-based questions with two distinct choices. On the condition of completing all 12, you get a “Nighty Dozen” too. As far as the content goes, you can expect a quick and fun start to each morning, giving you a little bit of knowledge about what’s buzzing around the world.

So, you might think, what was it that inspired Science Technology Studio to launch an app as lucid as Wishbone? Let’s find out.

Hover over some of the most popular cards that are making rounds:

Wishbones that are all about fashion and latest trends Wishbone based on recent festivities and events 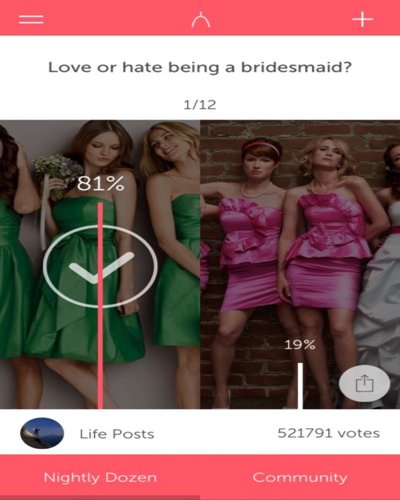 It is evident that Wishbone’s content is more focused on female users within the teen market. But that doesn’t mean there’s no scope for men to use the app. Have a look!

Camera drone or a selfie stick? 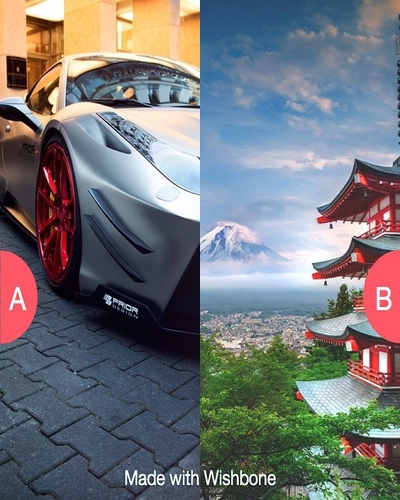 A dream car or a dream house?

Wait. Before we jump on to the hows and whats of the tactic, we have some interesting stats to show you. These stats have been absorbed from Mary Meeker’s Report on how Millennials spend their time.

First off, 87% of young adults—or those between the ages of 18 and 34—who own smartphones report never separating from their mobile devices: “My smartphone never leaves my side, night or day.” And four-out-of-five of them report that the first thing they do upon waking “is reach for my smartphone.” Good morning, screen-glow.

Nearly as many, 78%, spend more than two hours per day using their smartphones. And three-out-of-five believe that mobile devices will somehow vaguely rule every aspect of the future: “In the next five years, I believe everything will be done on mobile devices.”

So what do teens care about now on their phones? For those who average roughly 16 years, about one-third report prioritizing Instagram as the most important social network.

Also, here’s another report from Pew Research Center that spills some more beans.

Aided by the convenience and constant access provided by mobile devices, especially smartphones, 92% of teens report going online daily — including 24% who say they go online “almost constantly,” according to a new study from Pew Research Center.

According to the report, Teenage girls use social media sites and platforms — particularly visually-oriented ones. 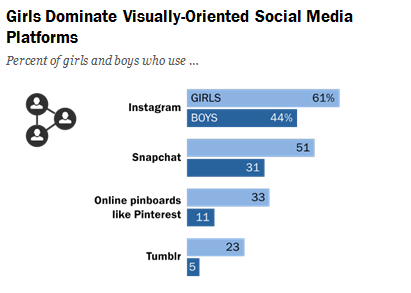 Now, coming on to the app, Wishbone is an application that smartly targets teenage girls by providing them pop culture content on a scheduled basis — none of this on-demand stuff. The user is shown a card with two choices, and she votes for which is her preference.

Science chief executive Mike Jones was reported saying that his firm was looking to focus on social entertainment, namely areas “where we could capture times where [teenagers] could get experiences throughout their day that’s social and [provides] content.” He continued, “Teenagers have a large block of time each day spent on entertainment, but weren’t consuming or spending a lot of time on apps.” Teenagers wanted more.

Instead of watching television or going on Facebook, teenagers are doing other things on their mobile device.

Jones claimed that the usage growth of Wishbone is “skyrocketing,” but he believes that he’s found a way to tap into the teenage demographic: “There’s a belonging, fun aspect to it.”

Wishbone is the very first mobile app to come from what is now Science Inc.’s fourth big, in-house business unit. The investment group and conglomerate, which made a name for itself with investments in companies like Dollar Shave Club and DogVacay, sits on a large portfolio of companies, in addition to four wholly-owned entities that are part of Science Inc.

The newest of these entities is Science Mobile, managed by Science chief executive Michael Jones.

So, why are we even discussing this, is only because Jones has contributed a fairly good amount of in-depth research and a whole lot of thought process before conceptualizing the idea of coming up with a Quiz game.

For Science, the push into mobile began with a nighttime realization while Jones was waiting for his children to fall asleep.

We all can connect with this downtime between responsibilities where in we click around the mobile phone, only to realize after a while that we have reached the limit for content consumption on traditional social platforms. Jones witnessed a similar situation.

“I felt like I got to the end of the Internet after the first 30 minutes,” says Jones. “There just wasn’t enough and I thought about things that I loved to do and then I thought… quizzes were fun.”

Hence, this led the team to scrutinize how the television has people glued to it since decades. “We looked really heavily at the television and wondered about the formats that worked with audiences, and that was appointment viewing,” Jones said. “We tell the audience and notify them when a new set arrives. It’s predictable, and it can be completed.

Applications on the phone need to be single fast and single-focused. Teenagers in America respond well when they know that this app does this and this app does that. Wishbone does one thing. The specificity of action is important.”

After tons of researches and speculations, instead of requesting them to comment about a particular issue, the team concluded that it is more akin to things like, which one is better: This or That? Taking some inspiration from the episodic serials broadcasted on the television, Wishbone served a dozen cards in one sitting and then the users have to wait for another set to be released on timed intervals.

Also, while curating the content, the team makes sure that it serves the most buzzing topics from across the globe, allowing the mass to keep up with the news and trends by simply flipping a dozen cards one after the other. This grants the mass and especially the teens a platform to voice their opinion on trending topics every day.

Few yet gripping facts about Wishbone:

Wishbone’s efforts to curate media content on a smartphone in a fun way has definitely bridged the gap between the teens’ willingness to grasp content beyond what’s already available on common social platforms and the media that’s trying to gain the audience’s attention. No wonder smartphones are becoming a place for media consumption and user generated media creation. Interestingly, things snowballed when the Wishbone team started letting users make their own cards. This sense of being able to contribute to the platform and seeing other people poll on their generated cards inspired more people to do the same. Altogether, Jones believes that their theory about aligning social content with teen entertainment is proving true.

On witnessing Wishbone’s success, one can say that in the current times, a distinct app idea has the potential to win over a well-thought-out app marketing strategy. Hence, keep in mind that you don’t miss out working on a groundbreaking app development process with an opulent concept while you are busy with making your app noticed.

The post is in line with the popular “How Did They Do It Series,” that is featured on Appn2o blogs.

Aparna is an ardent writer who is fond of all things design and technology. She believes in evoking fresh ideas through her writing. In her spare time, she loves to explore novel apps and read about marketing apps and art.