They need to be monitoring such key metrics as Downloads, Session Length and one of the most important ones, Retention.

This monitoring has to be performed from day one to gain a deep understanding of user behavior, learn the why behind user actions and come up with an optimization strategy to address any issues that are causing friction, hence increasing engagement and retention in the process.

Below we take a look at some of these key metrics in the categories of Acquisition, Engagement and Outcomes that every app publisher needs to focus on. We will also provide examples of the numbers behind each of these categories.

We touch on a handful of key metrics in this post. However, you want to pay special attention to the engagement metrics, as those are crucial in optimizing your app. By monitoring the key metrics in these categories you’ll gain insights into your app’s success and where it needs some work. You’ll learn what elements of your marketing funnel need refinement.

In order to measure the key metrics from the moment you release your app, you need to integrate a mobile analytics tool into your app, such as Appsee.

Below, please see the key metrics per category:

The Acquisition category covers the metrics related to acquiring your users. There are a number of metrics in this category, but I’ll review the ones that are the most important.

This metric is where it all begins. App publishers the world over focus on this one metric for the most part, as soon as their app is launched in its respective app store. Downloads are a difficult goal to achieve, with the plethora of apps out there in app land, but it really is where it all begins. While downloads are extremely important, you really want to convert those first time users to 2nd, 3rd time users and so on. Once you have them you don’t want them to drop out. Retention rates, which we’ll get to a bit later is something you want to be as high a percentage as possible, so you’ll be able to maximize monetization and conversions.

Downloads also tell you another thing. The metric also lets you know where your users are coming from. Are they coming from a link posted by a top blogger? A Facebook campaign? An online article in the Wall Street Journal? This type of information will help a marketer focus on where to best spend their advertising dollars as well as come up with a CPA (Cost Per Acquisition) number.

There is no better metric that will allow you to gain insight into exactly who your users are. Are they from North America? Latin America? Do they speak Spanish or Portuguese? Did they graduate high school? Are they from a large city like New York City or are they more from rural towns in America’s heartland? What is the percentage of male/female users?

This metric will help you design your UI to best engage the audience(s) using your app. You may have noticed the color of choice in the gambling capital of the world, Las Vegas is red neon. This color is known to reflect a riskier action. Blue, on the other hand has a more calming effect. Chinese websites for example, are extremely busy places that put a lot emphasis on a certain shade or red. It only stands to reason that using this shade of red on mobile might be a good strategy for your Chinese audience. So, knowing where your audience is from is paramount to knowing how to optimize everything from design to screen layout.

Users that use your app at least once become part of this metric. A new user is defined as someone who has downloaded your app and used it a single time. This really only tells you so much. It tells you that someone has taken some interest in your app enough to download it. The more of these users you have, the more potential is at your disposal to engage these users and make them active. You can see it as a numbers game. Every new user presents you with an opportunity to create a larger group of users to make active, engage and monetize.
The behavior of new users is critical to analyze, so that you can refine your app as needed and ensure that they remain on board and stay connected. For example, you see that new users are dropping out after the 3rd screen of your sign up process. You discover the reason for this is apparent frustration by the number of screens to sign up. You create a one-click sign-in with Facebook/Twitter option and you notice that your news users are sticking with your app and returning.

The more active users you have, the higher the potential for your app to succeed. This metric reflects the percentage of your users that return to your app on a regular basis, interact with your app and convert. When you study this metric, you are sure to gain insight related to these active users’ behavior within your marketing funnel. You will be able to see what makes them engage, where they engage the most, while seeing what doesn’t engage them and where they do not. Taking these observations into account, you can make sound decisions on what to refine in order to maximize their mobile user experience.

These are metrics that are related to how users interact with your app. User flow, session length are a few of the metrics that need to be monitored in order to know what to improve upon.

Measuring the retention of users is conducted via cohort analysis (see example below) which presents you with the percentage of users who not only have downloaded your app, but have been returning to use it over a stated time period. By monitoring this metric you will learn how your app optimization efforts are progressing as far as retaining users. Conversely, you may also identify an issue in your app if you see a significant drop in the retention rate.

How do your users navigate your app from screen to screen? The User Flow metric paints a picture of the order that users are taking from screen to screen, where they are getting stuck (E.g. Setup, Signin) because of any friction they might encounter. Being able to see what action they are performing on screens will allow you to understand their behavior, optimize and re-release.

By seeing which screens are causing users to drop out of your app, you can take a deep dive into the why and optimize as needed. Some screens might be causing friction, causing user frustration and causing them to drop off. For example, you notice many users dropping off a particular screen. By studying your touch heatmap report, you notice a lot of users tapping non-stop on a particular area on one of your screens. Upon analysis, you discover they are mistaking the image as a call to action (CTA). This will allow you to remove the friction via optimization and release again, thereby retaining users instead of losing them. You fix the problem, and see your dropoff rates become a thing of the past.

This metric is all about gaining insight on the stickiness of your app. See how your users are engaged with your app by studying the length of the sessions. The more engaging your app is, the longer users will use your app. If it’s the images that users find appealing, then serve them more of that. If it’s content, then present them with more of that.

The outcomes category relates to how often and where users are converting within the app itself. Whatever your goals are, whether it be an eBook download, a signup or a purchase is vital to measure.

The use of ads such as Native and Interstitial are prime strategies to include within apps by publishers. The goal of these ads is to inspire users to purchase other apps. By delving into this metric, you can optimize your app, by seeing the best places to maximize conversions.

Downloads, email signups are examples of goals that app publishers need to monitor, so that they can strengthen calls to action and screens in the funnel, to increase the number of conversions

Many apps offer users the ability to continue a game for example or additional content via purchasing. By studying where your users are making purchases and where they are not, you can refine your app accordingly.

Metrics: By the Numbers

I am including some statistics below based on the aforementioned categories and metrics, so you can gain a better grasp what each represents in terms of value.

Below please see the % of cell phone users who are active on social networks from their phone. App publishers that neglect this segment, by say not including sharing capabilities within their apps, could be missing out big. The chart below shows a growing trend that is sweeping the globe. By utilizing WhatsApp as a model, you can follow other messaging apps such as WeChat and find a way to integrate them into your mobile app(s). 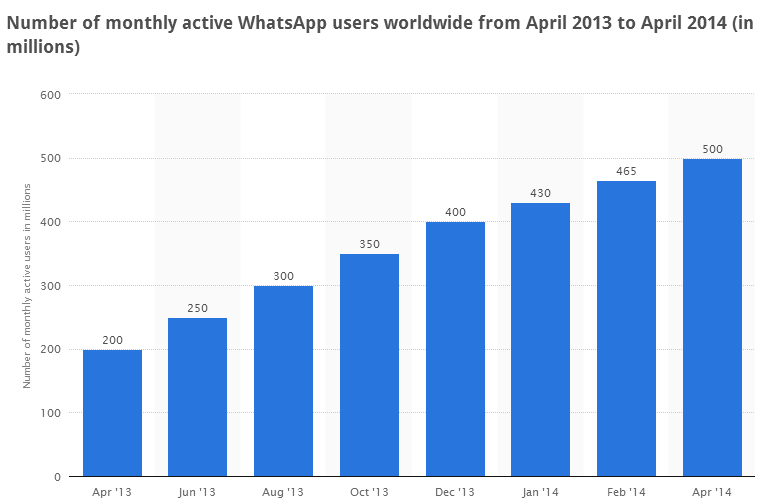 Here you can see the breakdown of Smartphone owners in the USA (January 2014), which is pretty much even across the different denominations. This should be a wake up call for any app publishers who make app optimization decisions based on demographic make-up. 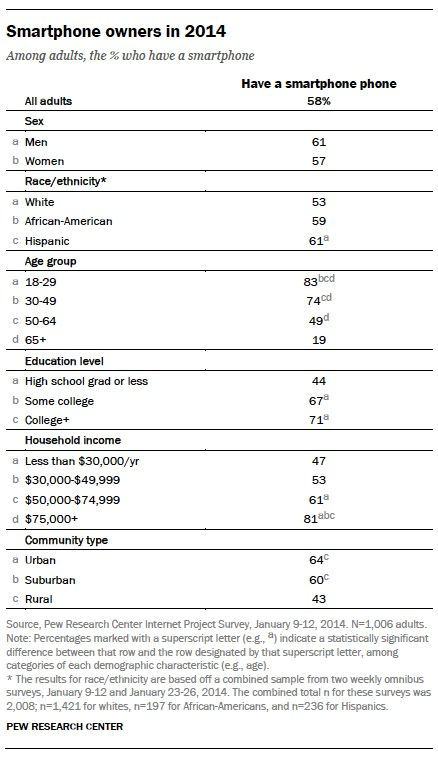 The statistic shown directly below communicates the rate of daily engagement on selected mobile social media apps among the Android crowd. For instance, as of January 2014, it was discovered that out of US based Android users, 36% of those who installed WhatsApp, also were active users. Out of all the social networks, Facebook was reported to have the highest daily engagement rate on mobile. 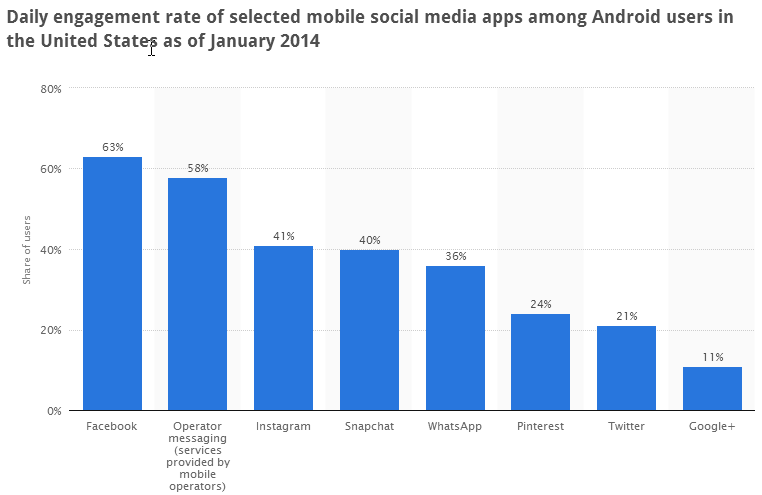 The statistic shown below reports data regarding the conversion rate of online shoppers globally during the first quarter of 2014, according to device. As you can see, just under 1.5% (1.46) of global ecommerce site visits via Android tablet devices converted into purchases. App publishers might take a look at the stats below and integrate them into their app optimization efforts to inspire more conversions on specific devices. 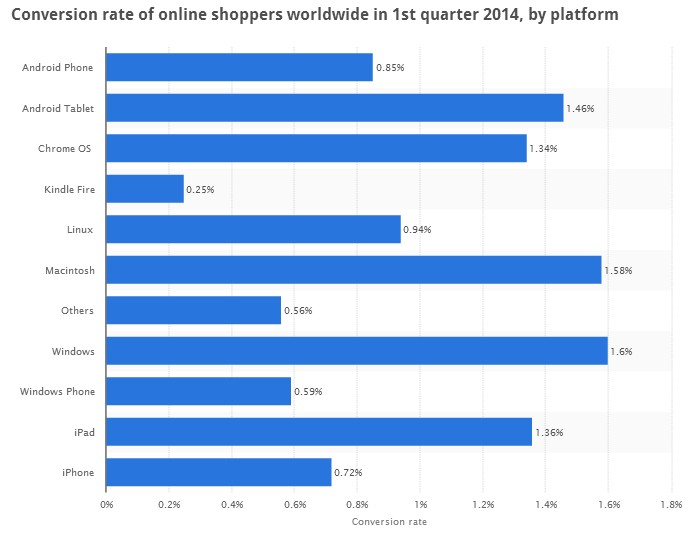 In this post I’ve gone over a few of the key metrics in the different categories that you need to monitor. I’ve also provided some examples of the benefits you will realize by studying them in your quest to maximize app optimization. However, what you really need to do is formulate a plan, create a monitoring and app optimization schedule. Pretty soon this will all run like clockwork, but it’s in your capable hands. Now, go make your app the best it can be!

Alon is VP Marketing at Appsee Mobile Analytics. His areas of expertise are online marketing, mobile analytics, and mobile UX. Alon is experienced with the app optimization process for delivering increased engagement, conversions and in-app monetization.