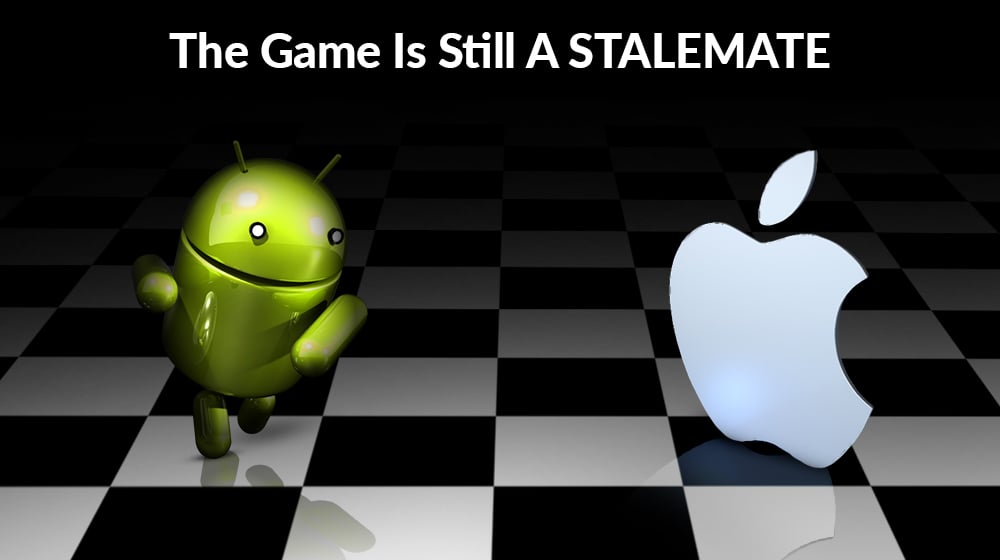 One of the crucial decisions for every developer is deciding between App Store and Google Play.
But hey! It’s not that complex question anymore. It’s simple as you see it.

Developers, who are primarily interested in ‘making big revenues’, target iOS and those who prioritise ‘wider audience’ over revenue, target Android. But as much as it is about your ‘primary’ interest, it is also about the audience you want to cater to and the investment you need to put in to make an app for Android or iOS.

There’s no secret that the mobile industry is spreading like anything across earth and the numbers we have from Android & iOS are even more amazing. Apple did the unexpected and had the best 2014 by selling a record 74.5 million handsets and thereby putting $51.2 billion of revenue in their basket. By leveraging alone on iPhone6 and iPhone6 plus they received this overwhelming success.

Though Android didn’t have a record-breaking 2014 revenues like iOS, but they are not empty basket. They managed to pull in some pretty impressive numbers too. Android dominates nearly 81% of the global smartphone market share, in contrast to 15% controlled by Apple. Android accounts for more than 1 billion smartphones out of the total 1.28 billion smartphones currently active.

As we can see above, the gap between revenues of Google Play and App Store is huge but the trend seems to be similar. Whereas in case of downloads, Google Play has shown immense growth since 2013 as compared to App Store which has only shown a small drift. So, is Google more popular amongst people!! Then why isn’t it earning revenues!!

The worldwide smartphone market had a kick start this year as well with unexpected post holiday dispersion in shipment volumes as compared to previous quarter results. According to International Data Corporation’s report, vendors shipped a total of 334.4 million smartphones worldwide in the first quarter of 2015 (1Q15), up 16.0% from the 288.3 million units in 1Q14 but down by 11.4% from the 377.6 million units shipped in 4Q14. Android dominated the share in unit shipments and Samsung proclaimed its global lead with a renewed focus on lower-cost smartphones.

Android ruled the market ‘like a king’ with a 78.0% share with the help of majorly Samsung and other upcoming players like Lenovo, Huawei, LG, Xiaomi, and ZTE which ranged from flat to 28% YoY growth. They managed to increase its volumes quarter on quarter with strong sales channel, wide product portfolio, and particularly a greater focus on low-midrange segment.

iOS witnessed a slight fall in share of shipments and accounted for 18.3% with 6.12 million shipments. But Apple’s follow-up quarter appeared strong and surprising for all as it enjoyed great success in terms of revenues due the insatiable appetite of larger screen iOS devices in key markets like China.

Also according to a recent study, the revenue gap between iOS and Android app downloads has broadened and we might continue to see this trend in the coming quarters. The first quarter of 2015 witnessed apple’s App Store leading over Google Play in term of revenue while Google Play maintained its win over App Store in terms of downloads.

The strength of Google’s app downloads is attributed to increased sales of smartphones in emerging markets like Mexico, Brazil, Turkey, India & Indonesia. “As the population of first time smartphone buyers in these countries reaches critical mass, the Android ecosystem is likely to be a major beneficiary”, the analytics firm noted.

The revenue growth for Apple’s App Store is buoyed majorly by China and the United States. “In stark contrast with Google Play, growth on iOS seems to be a function of more established markets,” the analytics firm noted.

In china, where people love big screens and the demand for larger screens is particularly high, iPhone 6 and 6plus became the new pro.

During Q1 2015, Apple devices accounted for 25% of all smartphones sold in China making almost $16 billion revenue. Apple is now the top smartphone manufacturer and vendor in the country, surpassing Samsung and holding back the local upcoming manufacturer, Xiaomi. China now ranks no.1 after surpassing the king, The United States, in app downloads due to growing love for iPhone in the country. China’s growth was chiefly steered by downloads of games and photo & video apps.

However, though China is towering on downloads, United States still tops the list maintaining its rank one in terms of revenue. But with the increasing number of first-time smartphone buyers in China and increasing popularity of iPhone devices in the country this trend may also reverse in coming years.

China seriously “stole the show” with these impressive figures.

This growth can be attributed to Android’s growing popularity in emerging markets especially Mexico, India, Turkey, Brazil and Indonesia. The first time buyers here are after Android and hence the download volumes soared in these markets. Besides Games, Education apps also experienced a boost in these markets in terms of both downloads and revenue. Tools apps (which feature a range of apps from security apps to keyboard replacements & more) also significantly gained popularity and more downloads.

Mexico, in particular, made significant gains in Q1, and hence was referred to as “app store superpower” by the analytics firm.

The growth in downloads above is not only because of overall smartphone sales boost but also because of Android’s adhesion in these countries. Android’s operating system is all the rage in Mexico, with 85% of the smartphone installed base according to IDC, and 29 million smartphone users in 2014 (or 24% of Mexico’s population), as per eMarketer. By 2018, these figures are expected to rise even more steeping the growth of Android.

In terms of revenue, we can see a very different list than downloads for Google Play. The list is topped by Japan followed by United States, South Korea, Germany and Taiwan.

So where are the most revenue and downloads coming from?

Ever wondered which categories contribute most to downloads and revenue generation!!!!

Gone are the days when the app developers used to describe the world as ‘an app world’, today it has become ‘a gaming world’ instead. The Games category persistently leads in both downloads and revenues in App Store & Google Play in 2015 and remains the driving force for major shifts in geographies.

Fabulous performance of video streaming apps elevated the Entertainment category to #4 by iOS revenue. HBO Now and Hulu fueled revenue growth in the United States, while in China headliners were Youku, iQIYI and Tencent Video.

Explosion of video streaming services naturally happens on all digital devices including smartphones. Streaming platforms and apps position themselves as the dominant force leading us into the next era of video entertainment. This may become the fastest growing sector which shouldn’t be overlooked.

Whether you consider these figures to be striking or not, they exemplify current trends in the mobile industry. These trends put forward some attention-grabbing questions for app developers: should you develop an iPhone app, where you will be nearly certain about the revenue? Or do you develop for Android, where your apps are more likely to be seen and downloaded by the population of millions & more?

So, we have the stats now, but all that really matters is that the volume of apps being downloaded is increasing and so does the revenue. However the growth is not proportionate for all.
Some are running behind in terms of revenues, others are losing out in terms of wider reach, but none has won the race up till now. We can say, Android and iOS have reached a situation of STALEMATE wherein we don’t have a definitive winner, until the time when either of them is leading in terms of both; the revenues as well as downloads.

I am a Marketing Expert by profession and I love creativity and ideas. As a writer, I am a starter and love to write about anything and everything that pertains to the digital world, as I believe it’s an ever evolving space creative in its own way.