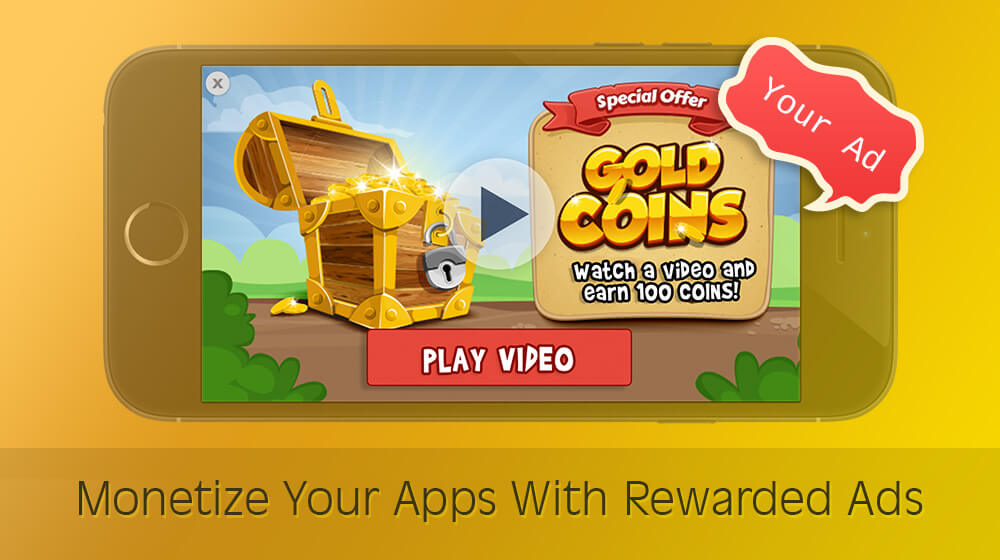 Rewarded Video Ads are ads that incentivize the app user for watching the ads. The incentives usually are in-app coins, currency or additional tools or additional lives. Developers can however provide different kinds of incentives to encourage user engagement. As a developer, you can also offer discounted products, free products, coupon codes for discounted or free products, and more. You can make the video ads clickable to take the users wherever you want to. There can be clickable hotspots on the video accessible to users only after they have watched the video for a certain duration of time. There is immense potential in in-app rewarded videos strategy which can be explored.

According to a  recent study by Unity 46% of players said they preferred watching rewarded video ads over other types of ads like full screen picture ads, banner ads and interstitial video ads.

The study also found out that almost 80% of mobile game players are open to engaging with video ads for in-game awards.

Rewarded video ads can work on several levels. They are not just for showcasing your product. In fact you can use the rewarded ads strategy to engage your users and move towards different business goals.  Let’s look at some of the ways developers can guide the user behaviour with rewarded video ad strategy.

#Guide the Users to a site: Developers can put in a video ad with links which can take the user to a designated special offer site from where he or she could purchase things on discounted price. A user thus can be lured into watching an ad for discounts. If you are a new and upcoming online store looking for some recognition and brand building, you can opt for this strategy.

#Guide the User to Polls and surveys: Users do not prefer to engage in polls unless incentivized. Many businesses want user feedback on different aspects of their businesses. Developers can encourage users to poll by providing different kinds of incentives. They can combine rewarded ads with polls and get valuable feedback from their users. Something like “Watch the ad for 5 gold coins. Participate in the poll that follows and get 10 gold coins more,”or “Participate in the survey and get  $10 credited to your account,” can do wonders. You could be reeling in users who would have ignored the requests for participating in a poll or a survey otherwise.

#Promote a product: If you want to promote a product you have recently launched, rewarded video ads are your best bet to create awareness and the initial buzz. Offer the users discounts on watching the ad in full. You can also offer them coupon codes for free or discounted goods. You can also use deep links to guide them to sites from where they can get the codes for free or discounted goods.

#Guide the User to App Installs: Cross promotion of apps, in-apps promotion of apps is a very common and successful strategy. App developers can put in ads of other apps in their apps and offer free installs as incentive for watching the ads. Users love to discover new apps this way. Game app publishers are milking this strategy. They let the users have a little taste of their new game app with the help of the ad and watching the ad doesn’t take the users away from their original experience as they are incentivized for the same. They enjoy playing the new game as an ad too.

#Encourage Users to Share details of app experience on social networks: This one works best for game apps. You can show them a video encouraging them to share their achievements on social networks with a promise to provide them in-app incentives and rewards if they do so.

#Segregate Users and Customize the App experience: If you have the capability to segregate and customize the app experience of your app users, you can use the rewarded ad strategy to do that. “See this ad to unlock new tools” or “Unlock a new experience by watching this ad” – ads with similar headlines do the trick. You can integrate the select group of users who watch your ads with custom services and Custom APIs and provide them with promised unique experience.

#Promote a feature: Let’s say you just added a new feature in your app and you want the world to know. You want to explain the feature so that your users go in for an update. How do you achieve this objective? Collaborate with a popular app publisher who will tempt his users with a rewarded ad strategy. He will show your ad describing the new features in your app, in his app. His users will watch your ad for the tagged reward which again could be anything from a discount on your app to discounts on app install. You need to make sure that your rewarded ads are timed well. They should come up after a user has spent certain time in the app. Ill-timed and too many? The ads will lose their charm. Use them in such a way that the user is encouraged to spend more and more time with the app. Make sure your rewarded ads at no point cannibalize your in-app purchases. You don’t want to score a self goal. You need to strategically think about the placement of the ads, while making sure they appear at the best time possible.

The rewarded video ad strategy is a win-win-win strategy. There are three involved parties here and all three of them win. The user gets rewarded, the advertiser gets the undivided attention of the users and the app developer and publishers earn more revenue both from the advertisers and the users who stay longer with the apps. The aim of rewarded ads is to influence user behavior and to ensure that users continue with the app engagement. The rewards can be both virtual and a way to real goods. With incentives and in-app rewards they elongate their sessions and come back to the apps again and again. Most of the times, the user decides when he wants to view the rewarded ads, this aspect enables uninterrupted app experiences. This non-intrusive nature of rewarded ads is appreciated by app users making it the most preferred app monetization strategy.