PHP has remained as one of the most popular programming languages in the globe and we all know why.It is a loosely written language that allows you to instantly verify the results using a browser. PHP is very forgiving.Syntax errors in PHP do not usually land you in trouble all the time. This has been the backbone of this server side lingo till date. Recently, PHP got its latest stable update to the 7th version.  And with PHP 7.0, they took all that simplicity to another level.

As LAMP stack is one of the most common and price effective architecture startups like to go with, our developers have accumulated considerable knowledge on valuable PHP hacks over time. With PHP 7 in the market, developers are feeling a revived excitement as 7.0 shoots PHP’s power to the sky.

Like I said, PHP 7.0 is all about leveraging speed and flexibility, which has been so since the beginning. If you are planning something pertaining to server side scripting with your startup, have PHP 7.0 in your mind. After we had our upgrades we think that the reasons are overwhelming.

The new version of PHP beats everything hands down in speed. It is way faster than the previous version (obviously) and significantly quicker than HHVM by Facebook. 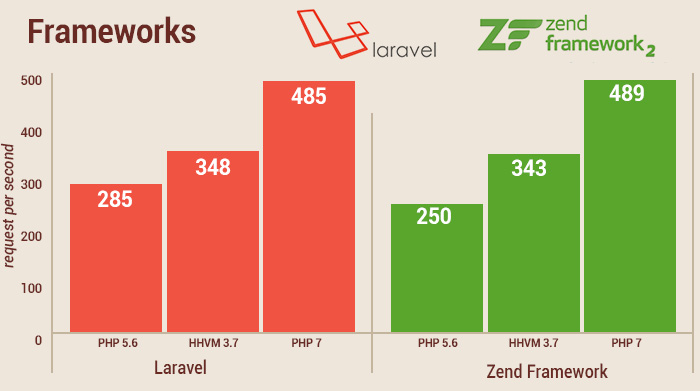 Popular frameworks running PHP 7.0 such as WordPress, Zend and Laravel have already demonstrated the benchmark tests. PHP 7.0 wins by miles.

Error Handling in PHP 7.0 is extremely efficient. PHP has been bad in this department till date. Handling fatal errors and catchable fatal error has always been a problem with PHP. But this is sorted out quite efficiently in 7.0.

A lick of shine from Pearl and Ruby:

Pearl and Ruby have the three-way comparison operator that returns 0 when both operands are equal, returns 1 if the left is greater and -1 if the right is greater. Represented as ‘<=>’, It is also called the spaceship operator and comes really handy in setting logic straight away.

It is commonly used in airline booking, hotel booking sites etc. where there are multiple options and need to fetch the best results across all options.

Apart from that, PHP 7.0 also has null coalescing operator ‘??’.

It can be used to find the existence of something or return the default value if it does not. It is mostly used to search for the best result or return default result(s).

Some good things from C# and Java

PHP 5 had this issue and it really needed a fix. PHP 7.0 did that. With 64 bit support, a developer can their PHP 7.0 in their windows system.

PHP has been known for its weak typing discipline. It is the most powerful feature of the language allowing it to be flexible to code faster than other languages. With the 7th version rolled out now, the ease of coding has only got better. I am sure that developers will have many reasons to embrace the 7th version and remain PHP developers for future as well.