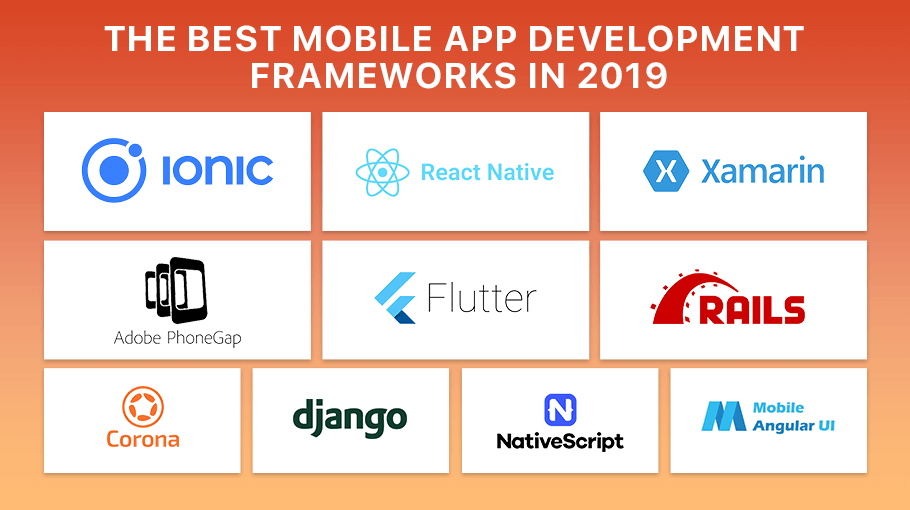 The vital nature of technology is an innovation that brings a revolution for the techies. The mobile app industry is an excellent instance of such a revolution. When we talk about mobile apps, the selection of mobile app frameworks is the most essential thing. Majority of the companies are switching from websites to mobile apps which increases competition in the mobile app world. As the standard of mobile apps is accelerating so does the usability and demand for Mobile App Frameworks. In this competitive phase selection of the right framework along with an apt platform and development strategy is pivotal.

What is a Mobile App Framework?

Why Use Frameworks For Mobile App Development?

Top 10 Mobile App Frameworks For Techies in 2019 and Beyond

Ionic is one of the most widely used frameworks for the development of mobile apps is free and open-source.

Ionic is a client-side framework that helps in building native-based apps with a combination of CSS3, HTML, and JavaScript. The element of HTML5 helps in developing hybrid apps as well.

Ionic enables mobile app developers to use one codebase to build apps for various platforms. The Ionic-built apps have crossed the total number of 4 million. The Ionic framework is highly prevalent in many distinct industries. Recent studies indicate that the highest amount of usage of Ionic across the globe by websites is in the United States.

The integration of Ionic with Firebase, Identity Vault, and SQLite provides authentication and security to mobile apps.

Ionic CLI, Cordova Plugins, Ionic View, and CSS & Javascript Components are some of the best features of the Ionic framework.

React Native is the competitor of  Native Scripts and Xamarin in the world of mobile app frameworks. It is used by Instagram, Walmart, Airbnb, Tesla, and many more companies like them. Some of the top apps using React Native are Instagram, Messenger, Skype, and Amazon Prime Videos.

As per research, ReactNative is the 11th most popular Javascript category.

Xamarin is a Microsoft supported framework. App developers use Xamarin to create apps for Android, iOS, and windows with the help of C# codebase. These codes are shareable across multiple platforms including Windows and Mac OS.

It is a framework for mobile app development that saves time for developers by allowing them to code fast. Since Xamarin allows the benefit of code sharing, the developers can save a lot of their time. Some of the best apps built using Xamarin are Storyo, Just Giving, The World Bank, Olo, Insightly, and FreshDirect.

The PhoneGap framework facilitates people to see changes instantly. It is a cross-platform development framework which allows app developers to develop in HTML5, Javascript, and CSS.

The apps by Adobe PhoneGap ensures not only high-quality performance but also allows mobile app developers to develop apps without any hardware limitations. PhoneGap can develop apps for Windows, Blackberry,  Mac OS, Ubuntu, and Firefox OS. The developers can also extend the functionality of this framework by adding plugins that are associated with it. With PhoneGap, the developers need to upload the codes, and the tool automatically compiles the code for them.

The apps developed by using PhoneGap are Paylution, The DHS Program, HealthTap, Wikipedia, and TripCase.

Flutter is one of the best hybrid mobile app development frameworks.

Flutter uses 2D rendering engine known as Skia to create visuals. These visuals are made to look like Cupertino style widgets and Material Design. The framework allows ease of testing to developers without restarting the project when an error occurs.

Flutter is a framework backed by Google which gives it a huge advantage since the reputation of Google products has always been outstanding.

Using Flutter, you can build cross-platform apps for iOS and Android that can run on any device. It uses Dart as its programming language.

The integration of Dart 2.2 & Flutter 1.2 is the major update by Flutter. Flutter 1.2 especially focusses on improving the performance of AOT-compiled code and improving AOT performance with the help of Dart language.

Rails is a Model-View-Controller framework which uses Ruby. It is an open-source and full-stack framework optimized for programmers. It is one of the most popular frameworks among mobile app developers. GitHub, Airbnb, Shopify, and Hulu use Rails.

Ruby on Rails framework is a beginner friendly framework that helps the mobile app developers in starting web development quite quickly.

There are many valuable gems for Ruby on Rails, which are library-like dependencies that extend the functionalities of your app. It also helps you in developing an app even faster and more efficiently. The latest version of Ruby On Rails 6.0 has come up with some interesting features like Action Mailbox, Action Text, Parallel Testing, Action Pack, and Action Cable.

The community of Rails is quite reliable and friendly, and there are many screencasts, tutorials, and resources that can help one in becoming a rails expert in no time.

Benefits Of Ruby on Rails

Corona SDK is ten times faster in developing an app than any other mobile app development framework. The Corona backend is supported by Lua which is a light-weight programming language that focuses mainly on speed, flexibility, and ease of usage.

Corona SDK is a framework for mobile app development that helps the developers who wish to code quickly and still maintain the quality of apps. Moreover, it is also free and cross-platform framework.

Being the fastest mobile app development framework, using it in developing games is very appropriate. Some of the best gaming apps built using this framework are Zip Zap, I Love Hue, Fun Run 2, The Lost City, Mandora, Egg Baby, and Draw Rider Plus.

Experienced developers built apps using Django and take care of much of the hassle of Web development. One can focus on writing an app without needing to reinvent the wheel. It is free and open source framework.

The business sector makes the highest use of Django framework, says a survey by similartech.

Native Script is a framework for the development of hybrid apps. A Bulgaria based software company, Telerik is a creator and supporter of this framework.

The apps using the Native Scripts framework utilize the same APIs similar to using Xcode or the Android Studio. One can develop native iOS apps as well as native Android apps using TypeScript Angular, JavaScript, and Vue.js. NativeScript transpires all the XML components to iOS components and native Android.

Native Script is a framework that follows a holistic approach. Once you write code, it will be running smoothly across all 3 platforms. With Native Script, you have complete access to all iOS and Android APIs.

The Mobile Angular UI is a framework that helps in developing mobile apps by combining the features of the Angular and Bootstrap framework.

Mobile Angular UI simplifies the process of development, and you can build the apps using HTML5. The mobile app developers can also make use of fastclick.js and overthrow.js offering a seamless experience.

This framework gives good server-side support and supports complex apps with ease. It is a free framework.

Nidhi Thakker is a technical writer at OpenXcell, a leading Mobile App Development Company in India & USA. Nidhi is passionate about technologies. She enjoys writing about Custom Software Development, Blockchain Technology, Cryptocurrency, Mobile Apps, and Internet Services. A techie herself, she has chosen written words to express her interest in the upcoming trends in the tech space.