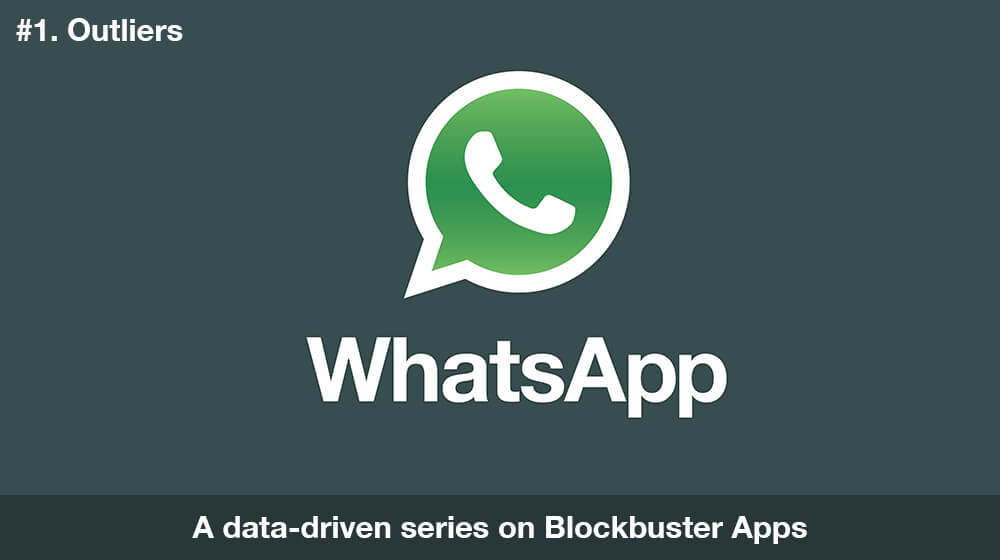 (A quick note: Today we begin the ‘Outlier’ series — an endeavor to track down those apps that  truly are outliers in all aspects. Just name it, be it in terms of  reach, user base, valuation or marketing opportunities, and they just have it. Well, we’ll chat on this subjective parameter more during the course of this journey. Hope you’ll enjoy this journey as much as we do. So, let’s start with a crappy short story on my day to day experiences with WhatsApp. Yup! WhatsApp goes first on our list for several good reasons. So, go ahead. Swim with me to savor those unbelievable Whatsapp details. Ready.)

Yours truly smsed him, which is something given that I am very bad with any dates, much less birthday dates.

But then instead of smsing me back, Sam WhatsApps me saying, “Whoa! “ That was, indeed, cool, cool, cool Jini.  You remember my birthday? Can’t believe this? Thanks a bunch buddy.”

For a full one minute, I felt goddamn awkward, backward, antiquated; as if  hailed  from some Victorian era. And then. And then, I let out a whoosh of breath. That’s it. What else?

( Old, stubborn, jackass that I am, I simply haven’t brought myself to using WhatsApp that often).

Um…ah. That’s my end of the story. Nothing magical. So, just forget it. Huh? That’s right. Forget it.

Here’s goes the other end of the story

Yes. WhatsApp’s  juggernaut is rolling on and on and on.

Its 900 million users and still counting. Isn’t this amazingly rich, rich, rich user base. And, this data is as per September 2015.  So we could easily imagine that this super -amazing app is marching toward its 1 billion mark very shortly. And, in all probability, this target could easily be achieved before the year ends, to say the least.

Rivals like Facebook Messenger with 700 million users and Wechat with 600 million users have some distance to cover before they could come closer to WhatsApp’s user base. But then you never know.

So what makes WhatsApp’s  growth story so phenomenal?

For one thing, the app is run by a tiny engineering team of 50, which makes it so appealing.  Yeah, just 50. In fact, when Facebook acquired it, the engineer count was just 35.  Another thing is that the app could be downloaded absolutely for free in the first year.  Not to mention that you could simply delete the app after using it for a year and then download the same for a free trial run for yet another year. Cool…huh?

Admittedly, even Jan Koum, the app developer, would have never ever imagined, even in his wildest  dreams, for that matter, that Whatsapp would be such a phenomenon.

The inroads the instant messaging app has managed to create in the Brazil, India, Malaysia, Indonesia and Philippines are mind-blogging. (For your information, WhatsApp has 96% reach in India, which is turning out to be the biggest catch for the app maker. And 98% of these Indian users are on Android)

And, not just the above-mentioned markets, the Facebook-owned platform WhatsApp is all set to  capture other world markets as well. Today, it is the fastest growing messaging platform and has added over 300 million new users since August 2014. This means it has been achieving an impressive year-on-year growth rate of 60%.  Not bad, huh?

Yes! Seriously Yes! Just 50 engineers are managing a whopping 900m WhatsApp user base.  And, that’s the long and shot of WhatsApp.

And according to software engineer Jamshid Mahdavi  of WhatsApp, a programming language called Erlang has partly turned out to be the sweet spot for the company. In fact, WhatsApp builds all its services employing this language. The biggest plus point being that Erlang is perfect when it comes to juggling communications between huge number of users, and on the other hand, the engineers could also deploy code on the fly. Not to mention several processes could be run at the same time.

It also uses a computer operating system called FreeBSD that helps in keeping the operations simple. According to Mahdavi, the company adapts minimalist approach to problem solving.

Instead of inventing a language and then figuring out what to do with it, they set out to invent a language which solved a very specific problem, says Francesco Cesarini, an Erlang guru based in the UK to wired.com.

But isn’t finding Erlang coders an issue? According to Mahdavi, the company hires the best and the brightest engineers, who are adaptable, and not the ones who are well-versed in Erlang. That solves the problem. But once the devs are hired, s/he has to spend the first week familiarizing the language; learning how to use it.

More than anything it asks its employees to focus on the task at hand and not to waste their time on other activities such as learning other technologies or spending time at office meetings.

According to figures from Globalwebindex in Q 2015, South Africa is ranked ahead of Malaysia and India  in terms of WhatsApp popularity. It is estimated that almost 70% of online adults, there are using the WhatsApp messenger.

In terms of reach, the app enjoys a whopping reach in India with 96% users.  Malaysia with 89% users  and Indonesia with 41% users rank second and third  in terms of reach respectively.

900M users sound good. But the question here is: Is the app really being used by 900M users? Nope. A Big Nope, in fact. For your kind information, the app comes pre-installed on almost all  smartphones, given that it’s cross-platform. So by default the buyer of a smartphone automatically becomes a WhatsApp user.  Whether s/he uses the app is not taken into consideration. And even if the app is used once in 30 days (one-time-login in 30 days period  is the standard for considering a user active), isn’t convincing enough given that an average user sends no less than 1000 messages on WhatsApp.

What’s more, the instant messaging app is less favored among Android users in the US, Japan and South Korea.

According to a report by ConsumerLab  62% Japanese Android users use their own Line app for calls and instant messaging app  while in South Korea a staggering 92% prefer KakaoTalk. It’s because these apps are localized and people here assign loads of importance to language and culture.

Free for the first year and then there’s an annual subscription charge of US$1. “No ads! No games! No gimmicks!” in the app.  This is how Jan Koum looked at it  since its inception in 2009. Because of this, during the beginning of 2014, the app had registered a loss of $232.5m.

However, with Facebook taking over the baton, fortunately, this model no longer exists. Apparently, Facebook might roll out the service with a B2C option and might as well take a cut from each message.

Or, it might even go the Facebook Messanger way and launch something similar like the concierge service- a service that helps users easily track down things what they looking for. The service, which is right now in beta version has the potential to turnaround the way we shop.

With WhatsApp growing big in India and Brazil, where the potential of eCommerce is still being discovered, WhatsApp has the potential to grow really big and give Facebook more than what they have invested in.

Given Whatsapp’s phenomenal growth globally, brands are keen on milking Whatsapp for all it’s worth. However, until Facebook took over the app, marketing of any kind was sacrilegious on the app. More so with its sole objective to connect with people with no plans to go commercial whatsoever.

Then voila the big takeover happened. Facebook bought it for a whopping sum of $19 billion. Brands started reading between the lines. The takeover meant commercialization of the app. And there it is.

Brands like Cartier, Armani and Diesel are harnessing WhatsApp’s’ user base  to communicate offers and promotions.

Yashovardhan Saboo, chief executive at Ethos, a chain of retail stores housing watch brands such as Rado, Cartier, Armani and Rolex while heaping praises on Whatsapp said this to one of the leading Economic dailies in India:  “Selling luxury is all about offering personalized services and platforms like WhatsApp enable that, which is why brands encourage their store managers to make an extensive use of it.”

Selling luxury is all about offering personalized services and platforms like WhatsApp enable that – Yashovardhan Saboo, chief executive at Ethos

Also, check out how Absolut Vodka promoted its campaign on Whatsapp.   Absolut Vodka had reached a milestone of 4 million uniquely designed bottles and to celebrate this accomplishment the users had to get themselves invited to the party of Absolut Vodka. And this is how they did it.

Why Brands Favor WhatsApp So Much?

Check out how Klik an Israeli Chocolate brand leveraged Whatsapp for branding purposes.

To-List for Marketing on WhatsApp

Over To You Know

I know, I haven’t covered everything under the sun when it comes to WhatsApp.

There are reams and reams of digital data still available on the same.

Go ahead and add to the WhatsApp amazing story in the comment box below.

And, yes, has your company leveraged Whatsapp anytime for app marketing purposes.

If yes, I would love to hear from you on that aspect well. (Go on. Find the second installment of ‘Poor Apps, Rich Apps’ series here.)