We believe, design has a significant role in the success of an app. Hence our mobile app designers are focused on usability and precision.

Being an experienced mobile app Designing company, we understand that mobile app development & design are vital considerations to reach your target audience.

App Design is where your app starts getting transmuted into reality from a mere idea. Both Apple and Android have their own design guidelines which must be followed to get the desired results. A lot of designers can make you an app, but only the ones with substantial and varied experience can give you the right output in terms of appropriateness and aesthetics.

At OpenXcell our designers have been crafting iOS and Android apps since the first iPhone and Android devices were launched. We have seen many iterations and improvements in design conventions from Apple and Google in the last 8 years and can confidently promise our clients of desired results.

Both Apple and Google have their own design conventions. While there are many areas where design conventions intersect, a lot of differences at fundamental levels do exist. You must hire a design team that can understand the difference between the two.

Apple shifted to flat designs since iOS 7. Flat designs eliminate shadows, gradients, and textures for efficient app performance. You can also say that when a skeuomorphic design is stripped down to its absolute basics, it will give you a flat design.

Smart implementation of flat design can create an instant understanding of various navigations within the app or website. Apart from efficient performance, flat design is extremely easy to scale which makes it compatible across screen sizes including desktops and HD monitors.

Material Design is a step back towards skeuomorphic design and uses shadows to create the perception of depth and three-dimensional effect. While Apple’s flat design conventions shifted the focus on performance, many disagreed with a complete strip-down of skeuomorphism.

Material Design does not specify conventions for each and every element, unlike Apple. But what it does is, provides the designer with conventions that mimic natural physics in many instances, making it intuitively understandable to users. The conventions do not go into microscopic aspects unlike Apple, but nonetheless, they are crisply laid out.

Material Design makes use of the Z-axis to create 3D effects and an effect of depth. The shapes of an object or material may change and take other forms. The depth of shadow also plays an important role in deciding the type of element on the screen. Similar to flat designs, Material Design also shows great cross-device compatibility.

OpenXcell has been designing app UI and UX for 8 years. With a consolidated experience of 700+ apps, we are one of the best app design companies you can hire. We have seen the entire design timeline for apps and also the periodic changes. Hence, there are a lot of reasons for you to hire us for your app design project.

Why Hire OpenXcell’s Mobile App Designer For Your App Designing?

Owner at Swipe my ride 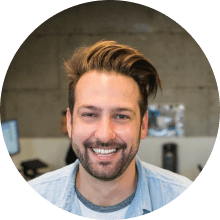