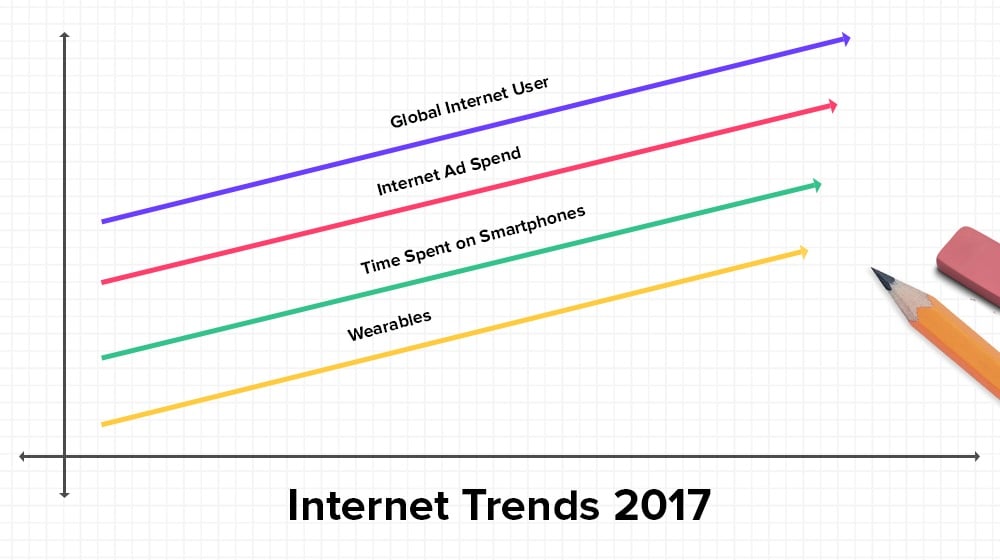 Mary Meeker’s Internet Trends 2017 report is here – straight from Silicon Valley. Internet Guru Mary Meeker is an investor and a partner at Kleiner Perkins Caulfield & Byers. Her well-researched and analysed slide decks are much awaited by the industry to understand the trends of the year.  Her slides provide relevant data which helps internet marketers, tech giants, media companies and  start-ups et al make sense of their business in a better way.

Let’s find out about a few trends she picked up this year.

#1 Steady Growth in the Number of Internet Users – Globally 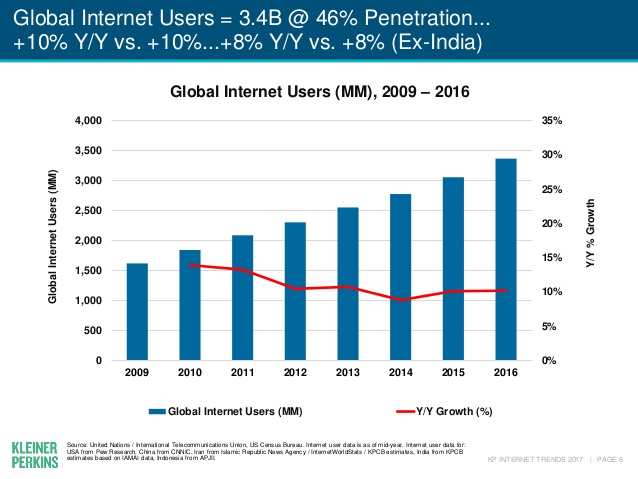 More and more users have been using internet. Their number continues to grow year over year. There are now more than 3.4 billion people on the internet. Global internet user’s number has been steady for a few years at the rate of 10% year over year. 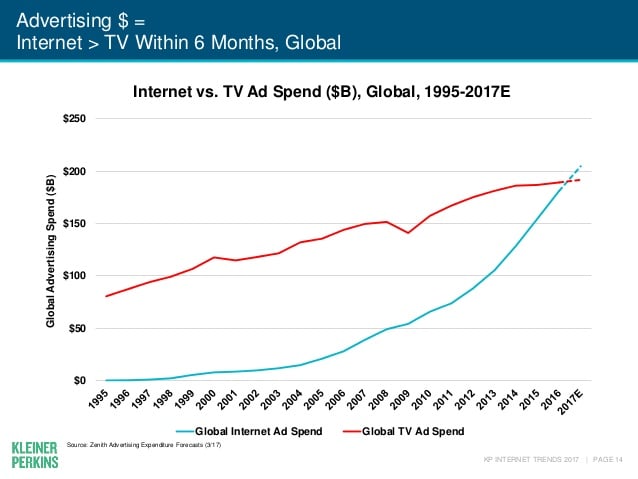 There was a time when people thought spending on adverting on internet was simply a way to waste your moolah. Times have changed and how. Internet Ad spend is all set to surpass the Ad spend on TV in this year itself. Every business worth its salt now has an ad budget for internet. Indians love Google Play for their Apps. Let’s now find out more about the apps they have on their smartphones. Whatsapp which was the favourite messaging app of Indians last year remains so this year too. It is followed by Facebook Messenger. Facebook ranks 5th at the Google Play Store. Jio TV app has been the app which has leapfrogged its way to the front and is ranked at 9th place currently. Surprisingly Facebook lite is not as popular as the main Facebook app. Facebook lite is ranked at 10th place.

#5 Re-Imagining Education With the Help of Apps 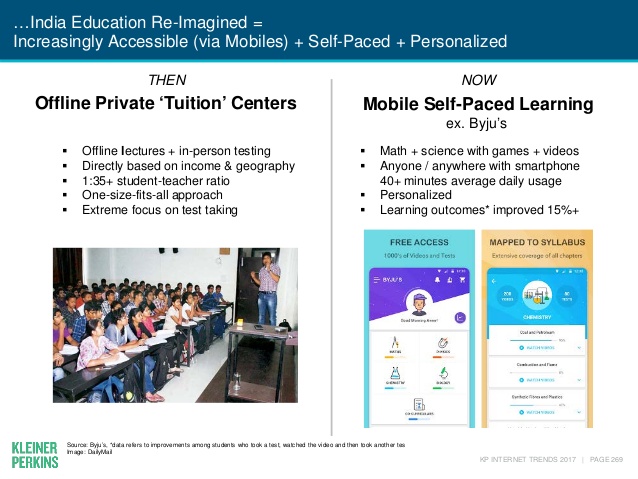 Meeker describes the India story in a few slides. India is re-imagining its way of teaching and learning with the help of apps. This slide in the deck is important to us. It has an app that we helped develop and scale as an example. Byju’s– you guessed it. This app was provided with role based dashboards for order fulfillments. We have been playing our role as a leading app developer and inventory management solution provider for more than 7 years now. You can have a look at our work here. 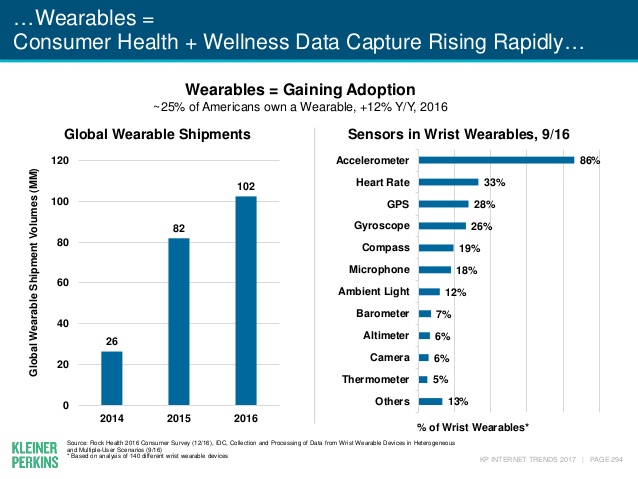 About 25% of Americans own a wearable device that captures wellness data. That is an year over year increase of over 12% in adoption of wearables. The evolution of wearables is fast. You can now find more than ten different sensors in wrist wearables. Almost 86% of them have Accelerometer. 33% of wrist wearables have heart rate monitors. More than 25% of them are GPS enabled or/and have a Gyroscope. The age of fancy wearables that help you monitor your health on the go is here.

#7 Are You Fit? Back Up Your Claim with Data From Your Apps 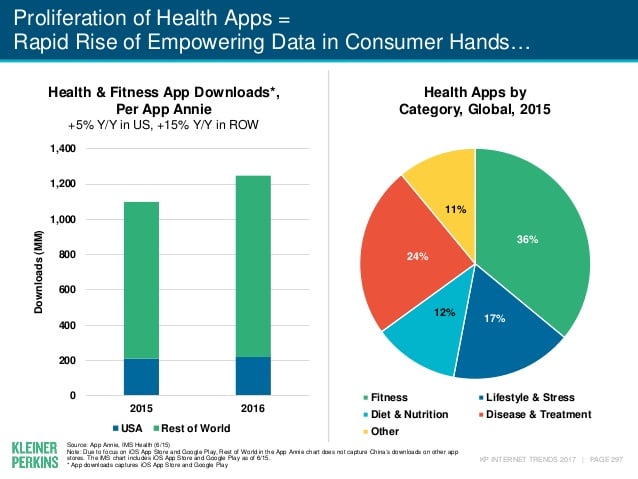 #8 Apple Is Earning The Top Dollar 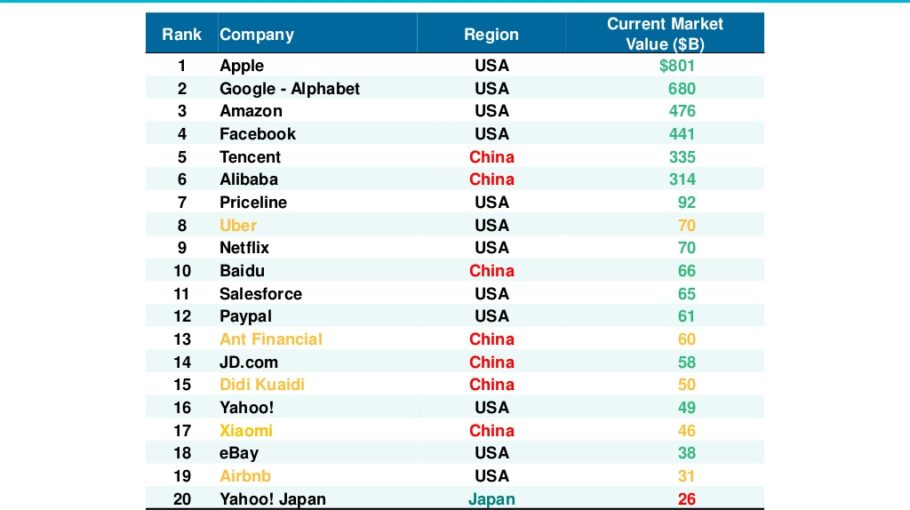 Mary Meeker tell us all about the movers and shakers who are earning the top dollars in internet based economy. In the first, second and third place you have three American companies -Apple, Google-Alphabet and Amazon respectively. Pretty predictable. Tencent from China is at 5th place.

This is amazing. There are several voice recognition devices like Amazon Echo, Apple’s Homepod and Google Home which are constantly evolving and getting better. According to Meeker’s report  Google Home now recognizes words with 95% accuracy. Word accuracy rate of 95% for AI is fantastic news.

Amazon wins the cloud race. Microsoft Azure and Google continue to gain grounds. The customers are playing safe. They do not want to be tied up in one particular ecosystem. They are avoiding being dependent on any one player. Most of the people are currently running their applications in AWS. More people are experimenting with Microsoft Azure. Google Cloud has a big lot of potential clients.

These were the few useful insights I chose to share. You can get plenty more information in Mary Meeker’s slide deck. Do go through it. And that will be all from my desk for now. Until next time, Adios.