“Hey! Jini, I rustled up a sumptuous chocolate cake today,” texted my sis-in-law on Whatsapp the other day.

(Pfft…Sitting at home, whiling away the time. Of course, she’d get all these ideas and much, much more, I thought to myself with loads and loads of resentment.)

But then, I kept this knack of mine, of being embarrassingly honest at all times, in check, this time. And, so with a heavy heart, I texted her back. “Whoa! Great ! Could you just Whatsapp those pics to me.”

“Oh! Lovely!” I texted my sis-in-law, who lives in Frankfurt, in return.

“How did you go about with that? Could you just Whatsapp some tips right away,” I added further.

Yes, that’s the magic of Whatsapp. It’s real-time. It’s convenient. It’s speedy. It’s cross-platform. Come to think of it, it has lifted communications by several notches. And, more than anything, it saves you the trouble of opening the web browser to send photos and all.

So, the point I am trying to make here is: If you power-pack your precious app with Whatsapp-like-qualities, that is real-time, convenience, speedy and cross-platform and all, let me assure you, millennials will make a beeline for your app, hook, line, and sinker.

In other words, be mindful of their needs, and they’d keep you in mind well.

Apparently, with app spaces spilling over with awesome apps, with Google Play Store being the frontrunner with an overwhelming 1.6 million apps and Apple’s App Store with a whopping 1.5 million apps, so as an app developer, if you are really desperate to garner gazillion eyeballs and downloads for your apps, target millennials: Now. It could be a life-saving strategy for your apps. So, are you minting a brand new app? Make it millennial-friendly without any second thoughts, given that it has a direct bearing on your app downloads and all. 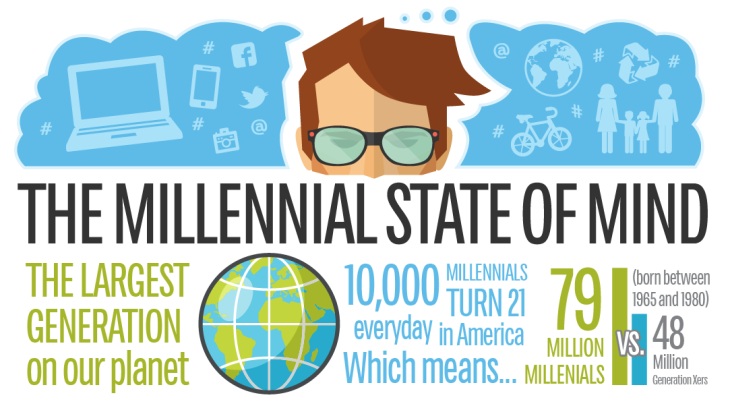 Well then, millennials are people born in between the early 1980s to the late 1990s. In other words, Generation Y users are called millennials. People born before that are referred to as Generation X.

Because for an app to make it to the top ten, it needs nearly 4,000 downloads.  So, let me assure, it’s easier to gain those downloads, if you target the millennials, given that they form the largest generation on our planet and are using smartphones in good numbers.

According to a recent survey by Nielsen 85% of the millennials, aged between 18-24, own a smartphone and 86.2% aged 25-34 own them. So, as an app developer if you could indeed target this particular segment of the audience, nothing like it. App Downloads will skyrocket. Nope, it’s not a million dollar question. It’s simple: Just place yourselves in their shoes and ask that question. “If I were a millennial user, will I ever download the app that I just made? If yes, then, of course, you are on the right track. Your app is sure to find decent or dramatic downloads or for that matter, whatever it’s destined for. If your answer is otherwise, then it certainly calls for an introspection. I mean, obviously you will have to re-design your app it to make it really millennial-friendly.

Hope, you are still there with me?

Okay, so coming back to the question, once again, what makes an app millennial-friendly? Here go 7 tips which will help you in this exciting quest in enticing the millennials for your apps.

Admittedly, apps are all about convenience.

For instance, the Uber app; you just tap away, and within no time, you are on your way towards the desired destination. On the top of it, you can even pay directly from this app.

Amidst an official dinner and you simply can’t wait to know whether your favorite football star Cristiano has scored or not, just check out Live Score Addicts app for live scores.

Found a wow blog post, but hard pressed of time? Just push it to Pocket app and read it whenever you find some spare time. Millennials are connected at all times: in the subway, in classrooms, in the movie theater, and, more importantly,  in the toilet.

To cut the chase, ensure that your app enhances the existing user routines.  As in, it’s a regular thing to hail a cab via website or phone, but the usage of an app simply accelerates or enhances the process. Likewise, it’s a routine thing for some to check ESPN sports channel for latest updates on sports. If the users replace it by an ESPN app, they could still remain posted on the latest developments, that too in the least possible time. As you see, these are some mundane actions and the entry of apps lifts up the user experience almost by tenfold.

What about your app? Does it make the lives of users convenient?

Take a clear shot at routine needs of users. And then build a unique feature around it. And then, make it the focus of your app. For instance, Domino’s was going through a rough phase. It’s cheesy products were finding no takers. An immediate overhauling of their marketing strategy was called for. Hungry late-night millennial became the focus of their attention. And, in next to no time, they build an app around this one particular feature: of catering to the hunger-pangs of late-night millennials.

The callers could simply order a pizza by clicking away a few buttons on the app. The strategy was a big hit. From then onwards, Domino’s Pizzas’ sales never sulked.

What about your app? Does it target a mundane feature and enhances the user experience?

By the way, users shy away from apps that offer commonly available services. As in, if your app only helps the user locate stores, then I am sorry, it would make it to the burial ground in next to no time. I mean, you can even track locations easily via Google Maps, then why take additional pains to download an app to search locations. Using Google Maps is easy after all. So, naturally users would prefer consulting Google Maps, in the first place.

The Starbucks’ app was developed on the same lines, that is, helping users target its stores via its apps. Unsurprisingly, the downloads were a disaster.

What about your app? Does it duck out commonly available resources?

For an app to be called ‘truly mobile’ it should work across all platforms. That could be your laptop, or desktop, or smartphone for that matter. This helps the millennial check data as per their convenience. If s/he is on the move, the data could be checked instantly on their smart phones, and whenever s/he could afford some spare time for themselves they could check the data on their laptops and so on.

What about your app? Does it work across platforms?

According to a recent study by Oracle, millennials accord paramount importance to speed when it comes to apps. And, so if the app is not speedy enough, the users will undoubtedly uninstall it in no time. In fact, one of the primary reasons for app uninstalls are slow performing apps. About 63% of the survey respondents reported it as the leading reason for app uninstalls. Other factors include cost (62%), security (59%), and design (49%).

What about your app? Does it work on all platforms?

The Oracle report also goes on to state that millennials who employ location-based services in an app, don’t prefer push notifications. Nearly 85% said no to push notifications and an equal number don’t react to them. Bear this in mind: Millennial prefer personalized, contextually relevant brand messaging content.

What about your app? Does it avoid push-notifications?

Millennials should be made aware of the fact that there’s a human face on the other end of the screens. So, go ahead and interact with them on social media. Empathize with their disappointments and, if anything, admit your mistakes as well. And, you will see you apps fan base growing despite little drawbacks and all.

What about your app? Does it empathize with the millennials?

That’s decided, then. You have decided to tap into the millennial market. Cool. But then, don’t forget that millennials act on their whims; so making an app for them is a riskier proposition.

Not with OpenXcell Technolabs. With over 6+ years of experience and over 700+ apps under our belt, no one could justify your app aspirations better than us. Nope, we don’t believe in self-praise at all. It’s just that we believe in ourselves a little more and at the same time ensure to marshal all our app resources in achieving, and even surpassing your expectations.

What’s more, our app development and app marketing strategies are purely based on hard facts – not on guesswork, guts and speculations.

Try us once. We won’t disappoint you anyways.