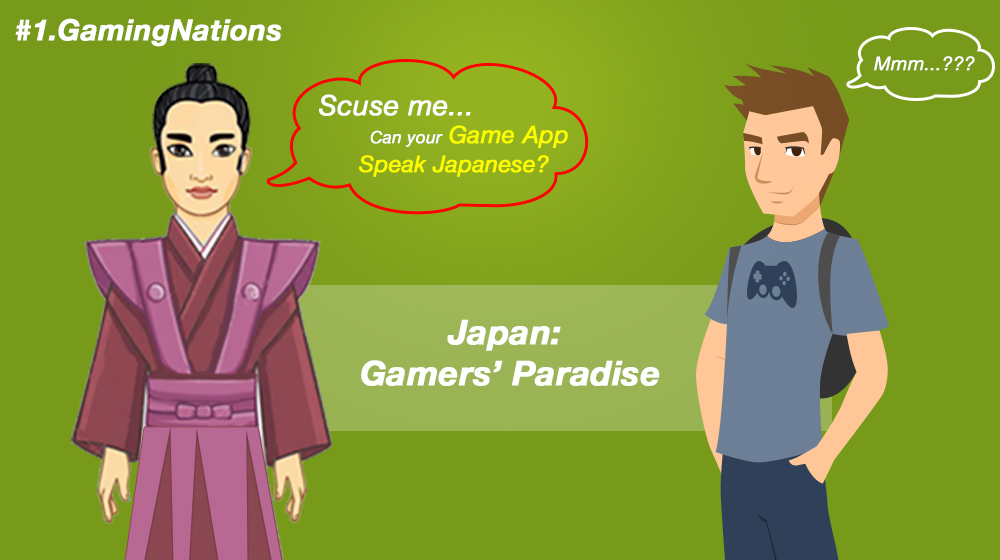 Every city/country, says author Elizebeth Gilbert in her book, Eat, Pray, Love, is defined by a *single word.* One particular word that rules the hearts and minds of the people on the streets.

So, according to her, for Rome, the word on the street is SEX, in Italy it’s POWER, in Naples it’s FIGHT, in New York it’s ACHIEVE, in Los Angeles it’s SUCCEED, in Stockholm it’s CONFORM, and, in Japan, it’s, it’s… mmm… wait, we need to figure this out.

So folks. What’s the word on the streets of Japan?

Go ahead. Get thinking. Get Googling.  Is it Karoshi? Is it Kaizen? Is it Games? Yay, Games. Why not settle for Games? Because, believe me, the Japanese do have a thing for games. Isn’t it? Wherever you look, you gonna find people busy playing games – left, right and center

People are serious about gaming. No, Seriously! Be it Subway, or college lectures or doctor’s waiting room or wherever you look,  for that matter, the Japanese are inevitably glued to their phones, playing games. So, I reckon, the word that totally defines Japanese, in principle, these days is *Games.* Nothing else. Mobile Games to be very very precise.

For starters, Japan has the biggest and most lucrative mobile game market in the world. And this market has raked in a phenomenal $6.2 billion in 2015E revenue.  And, this despite having fewer players than China or the U.S. How?

Partly because Japan has the highest average rate pay user than any major country. So, the point is: If you are a goddamn game developer,  you better goddamn get your priorities right, if you are goddamn dying to make great money out of your games.

So, make sure your game app checklist reads something like this:

So, you got your checklist ready. Great.

But then, look. Just scratching the surface won’t help. You need to go ahead and read in-depth the tips and tricks that would help you crack the ‘tough-nut’ country called Japan.

Tip 1: Bet On Local Ad Agencies With Loads And Loads Of Yen In Your Pocket

Mmmm… Let’s face it: the Japanese game market is different. In fact, I cannot explain enough how different it is. But truly, identifying the key differences is the only way to unlock this lucrative market of all the lucrative markets globally.

Yes, the Japanese are pretty much touchy about their culture and heritage. They want every little bit in their game app localized. Not just graphics. Not just characters. Not just texts. Even customer support, community management, app marketing anything that closely related to your game should be Japanese.

So, bet big on localization. Yes, indeed, every goddamn feature in your app needs to be localized. Content is just one among many things (One of the main reasons why it’s difficult for western game devs to make inroads in Japan)

Third: Show Your English PR Agencies the door. They have no business here.
So what sort of modus-operandi will work here?

Touch base with local ad networks and agencies. They know their people through and through and would help you tailor your campaigns as per their taste and requirements. Not to mention, recommending core changes to your app. By the way, even big gaming apps like the Clash of Clans and the Game of War had to change their messages to play along with the Japanese standards.

But then, luring big PR agencies would involve good work, unless you are ready to shell out big. So, the bottom line: Shell out in loads. Nevertheless, they are few PR agencies as well that work on a budget. For that, you need to figure them out.

Gone are the days when Google Play lorded over other operating systems in Japan. Today, iOS is the operating system of choice for the Japanese audience. In fact, this year the iOS OS witnessed an uptick of almost 15% from last year. From 55% in January 2014 it jumped to 65% the same month this year. 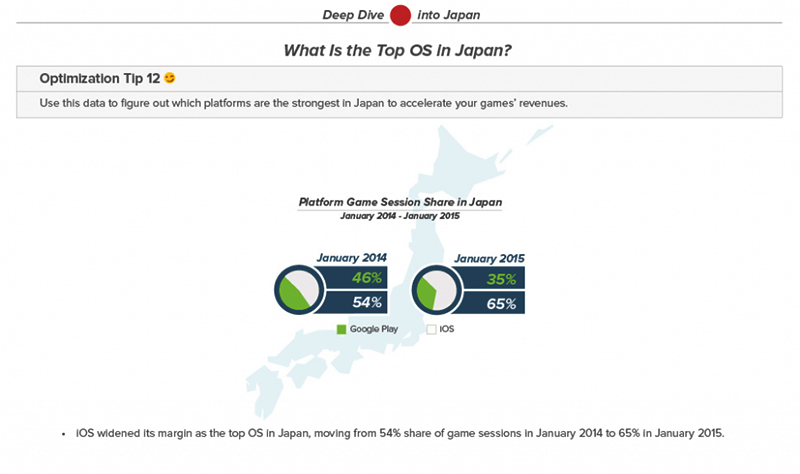 Just three years ago, Google Play was leading from the forefront. What made the table turns, then? Apple’s deal with NTT  DoCoMo, the largest cell phone operator in Japan, played a spoilsport for Google apparently.  Once the deal was done, Apple made inroads in Japan like never before, distributing phones to every cranny of the country.

Another factor that turned deadly for Google’s dominance is its fragmented market. The Japanese are game enthusiasts and they desire seamless experience while playing. This is something that an iOS operating system can guarantee and not Google’s OS.

Bet all that you’ve behind Puzzles and Role-Playing Games. They are leading genres in terms of size. More often than not, your game will find a foothold in Japan if it falls in the above two categories.  No doubt, the Cost Per Install of such apps is inevitably high, but then it would be worth your time, money, and effort.  In other words, even with high CPIs, you’d be able to draw downloads in hefty numbers.

Case in point for category games: Of course, it has to be Puzzle and Dragons by GungHo Online Entertainment.  The game witnessed 32 million downloads in November  2014 that too in Japan alone. Worldwide, the download count stood at 41 million in January 2015.  It’s reported to be the first game that made $1 billion in revenue. What’s more, Japanese users spend nearly  $11.89 on, in-app purchases of the game. 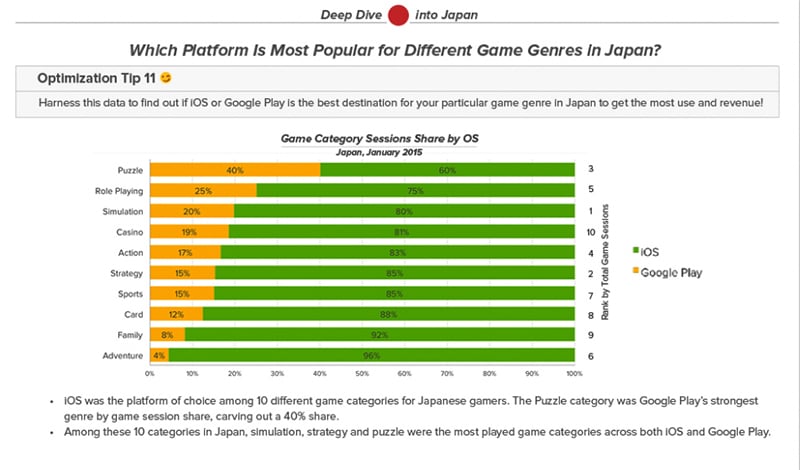 Puzzle and Role-Playing are the leading categories in Mobile games…chartboost.com And, don’t forget, Japan is the biggest market for paid games. Some apps are actually bought for US$20 and more.

Wish to launch your app in Japan with all the hype and hoopla? Bet on Burst. Burst campaigns would ensure instant inorganic app installs, in addition to drawing loads and loads of eyeballs for your apps.  More than that, it would get you outstanding organic downloads for your apps in the shortest possible period of time.

But then, don’t forget, for best results, choose those categories that are popular, and then go bust.

Japanese love to have their own games and are not big on foreign imports. Even there are several investors, app developers, publishers looking forward to co-developing with their foreign counterparts.

But then, so far bigger foreign gaming companies attempt to co-develop with Japanese counterparts haven’t been successful so far.

The partnerships that fell through include

So, what should foreign companies exactly do put their foot into the Japanese door?

Just target Japanese developers with offices in the U.S. That’s it. They are the best initial entry points rather than depending on your own offices in Japan to make things happen for you.

Why is this important? Burst campaigns are the only app marketing medium to win organic users in Japan. And even a minimum spend comes to no less than six digits USD. So, it’s damn expensive.

So, better get to test run your app in Taiwan before going the whole hog in Japan.

Tip 7: Go Social And Communicate With The Users

Japanese devs are more proactive on their social media machines, unlike their foreign counterparts. In fact, as part of their marketing strategy they gladly announce on these forms, what it is in that works for their games, and if anything, help troubleshoot problems.

In short, they ensure to ‘make every download count,’ by enhancing the gaming experience of the users, and in the process inspiring them to go for in-app purchases. 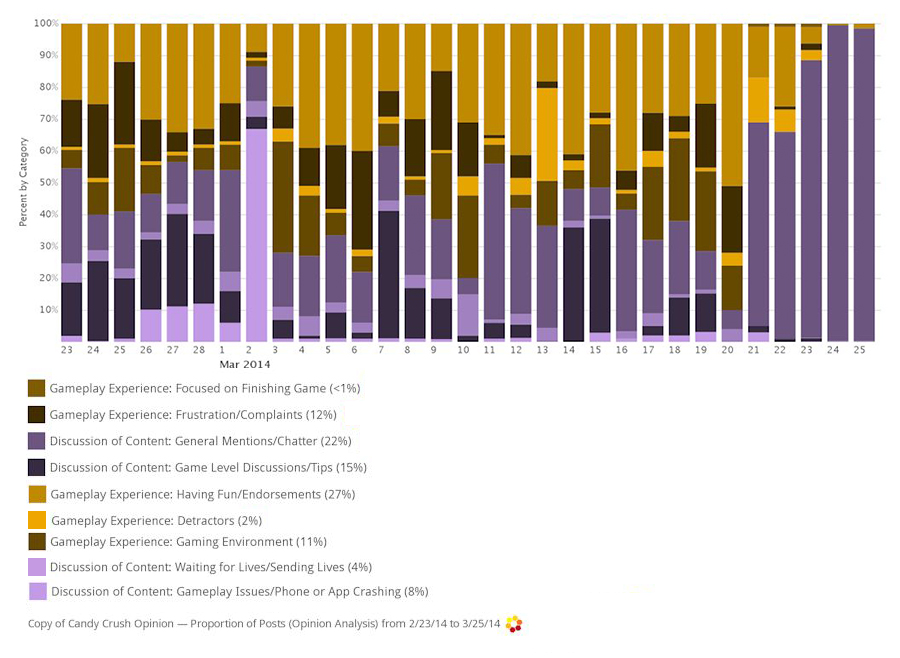 According to Crimson Hexagon, social media accounts give devs insight into the users’ minds, through their opinions and frustrations they openly express on these forums. For instance, you can easily find reviews of Candy Crush and Clash of Clans on Twitter and Facebook posts.  In a way, it’s free advertising for the developers as well.

Desperate to develop and market your game app in Japan? Why sulk?

OpenXcell has a team of expert app developers and marketers who know the Japanese market inside out to help you make inroads in every nook and cranny of Japan.

Over To You Know

Go ahead. Speak your mind. We are open to meaningful conversations and more.