Perhaps “Quadcopters” would be a better term for these machines which are increasingly penetrating into consumer markets. They are finding a variety of applications and pulling millions of start-up capital directly from people. However, a decade ago anything that flew with the help of a remote could only be an expensive toy or some experimental gadget. They suffered a chicken-or-the-egg problem arising from feeble utility that cramped the development of their navigation technology and vice-versa.

Fast forward to the time right now and the smartphone vanishes all those barriers existed back then. Everybody can easily pilot a drone/quadcopter without any hassle. And this has opened up the humongous consumer market for these machines. 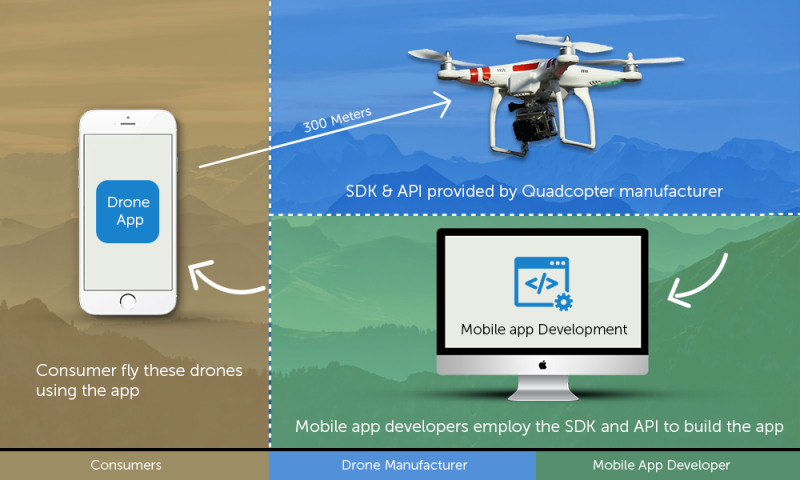 Things such as aerial photography and videography have seen a catalytic turnaround as they are opened to the generic people now. Other fields include Agriculture, News, Disaster Management, Public Service, Internet Service that can benefit immensely from commercial drones.

A report published by Gartner in August 2014 suggested an incubation time for the entire market to accept drones. The report also indicated that commercial agriculture will be one of the prime industries driving the growth of commercial drones. It also gives a list of the drivers and inhibitors of for the industry. However, at the same time, lifting of restrictions and laying out rules by FAA indicate a potential market for commercial drones is on approach. And the sooner you get into it, the better are your chances to pull off something big within a decade.

To register a successful quadcopter venture, a perfect mix Engineering, Market Intelligence and Marketing is essential. As far as we can see, flying a consumer drone is lot like driving a car. It needs to feel right. Better, if it feels great.

While cars have a lot of mechanical parts, consumers are flying drones with their smartphones. And that’s where a great mobile app can make or break your drone/quadcopter startup. In other words, the mobile app serves as one of the most deciding customer touch points for the device.

Let us first browse through a few successful consumer drone/Quadcopter projects and try to figure out the role of mobile apps within them. We shall look at a few examples based on their market success and applicability.

Probably one of the biggest money puller from the market. Plexidrone has pulled more than 2 million dollars from crowdfunding campaigns so far and going strong on Indiegogo. https://www.indiegogo.com/projects/plexidrone-making-aerial-photography-a-breeze#/story

One can mount 3 different cameras on the device. Collectively, they are calling it modular payload. The modular payload can be operated by an app installed within a mobile device. The app controlled modular payload of the drone

The company is also building an SDK framework for developers. Creating an SDK for the device makes a lot of sense here. When we worked on CA7CH (a video capturing app to record and stream live videos from a wearable video camera), we worked a lot on the UI. The team had a lot of ideas and faced a host of challenges regarding complexity of the UI and setting the multiple functionalities across the screen. While we had a lot of ideas flying, we had to comply with CA7CH’s vision and selected a host of features to build an app that everybody could use. CA7CH app made by OpenXcell

On the other hand, comparing CA7CH against Plexidrone’s Modular payload, one can easily understand that the cams on Plexi would find a lot of professional applications. While using the modular payload of the device a lot of priorities can be set which obviously points towards a myriad of apps for the device.

Parrot has 4-5 different types of bots under its belt. While most of the brands have priced their basic package at $400 or more, Parrot brings some cheaper alternative as well.

Parrot has built couple of mobile applications for their devices. These are Freeflight and Parrot Freeflight. Both apps come with basic functionalities that you can clearly make out from the UI. However, you can also buy a separate long range WiFi flight controller which could allow you to control the drone up to a range of 2 kilometers.

Both apps are basic in functionalities and perform all actions as anticipated. All Parrot drones seem very consumer-ish and rely heavily on the app to navigate the bots. The app plays an important part for the gadget.

CyPhy is another quadcopter start up that is anticipated to come with its own mobile app. The project raised more than $800k and has the same functional model as Parrot. It also boasts to have a stable flight than others and comes with a boundary feature that restricts the device within a set perimeter, say your backyard.

DJI is a Chinese company that is famous for its lower price tags. Their popular models are mostly quad-copters but they also have Octacopters selling in large numbers.

A lot of features are being invented and put into drones with a prime focus on making them more and more consumer-centric. Everything is going into the package– the utilities, the packaging and most importantly the mobile app.

While most of the mobile applications made for Quadcopter look alike, the effectiveness of the same might vary from one brand to another. Making an app that executes swift commands within an external hardware is a bit of work and needs prior experience. A large part of the work goes into removing the lag between the mobile app and the device itself. We face a lot of that while working on CA7CH.

As far as requirements are concerned, the foremost is the API. If you plan to build a Quadcopter, this is what you need to provide to your mobile app developer. It is extremely important for your developer to know what the Quadcopter should do and how it is supposed to do that. If you are planning to go more intensively about your drone project, you can also have a separate SDK for mobile app developers like us to use it and make utmost use of the machine.

Fundamentally, the app comes with some basic controls that allows users to fly the drone without hassle. The parrot app UI can be considered as standard. Market activity and technology concerned with drones are buzzing at the moment. A lot of rehash and refreshing of laws have been done and will probably continue. The permissible height and distance has also been decided. The FAA has also listed NO DRONE zones. All these are positive signs indicating a revolution. It is signifying that domestication of the Drone has already began!

The drone market is supposed to grow by a staggering $11billion a year and $86billion by 2025 (Gartner).

The FAA has laid out rules for all commercial drone flights for drone making companies. Have a look. https://www.faa.gov/uas/

DJI is the largest seller of drones which are marginally cheap as compared to its competitors (Forbes).